A New Use For A Gift Box

The holiday season has begun and it seems to be moving by quite fast. Before I jump into the holiday season with both feet - well, I might not jump, I may try to sneak or stroll in - I want to share a way you can use a gift box in a new way. Something you might not have considered. I certainly didn't but my sweet, little dog gave me the idea.

Shortly after my dear mother passed away early last year I cleared some things from a storage cabinet in her garage. She had a big gift box that I decided to take home with me. Another thing I added to my car that day was a very soft, cozy blue throw pillow. The pillow fit inside the gift box so that's where it traveled as I drove a few blocks to my house. The box and pillow stayed on the back seat of my car for a few days. A few days later my little dog, Joey, rode in the car with me while I ran an errand. It wasn't long before he discovered the box and the soft pillow on the seat of the car. He must have decided that it was the perfect place to curl up and take a nap. He loves to sleep on cozy, soft things and this was an opportunity he just resist. I'm sure he thought the box and pillow were meant for him.

After that ride in the car I took the box into the house and decided to let him have it for a bed. Joey is not allowed to have a 'real' doggie bed anymore - the fabric kind with stuffing inside. He chews holes in the fabric and delights in pulling the stuffing out. We have tried nasty-tasting spray made to prevent dogs from chewing things. It works for a few hours and then he ignores it and chews his bed anyway. We've tried many times and no soft dog bed has survived. So, when he adopted the big gift box and soft pillow it seemed like the perfect solution. He doesn't chew on the box or the pillow and that's a good thing. The gift box and pillow even ended up on the back seat of our truck when we left for our Grand Trip last year. It was a good place for Joey to nap while riding down the road on our long trip. 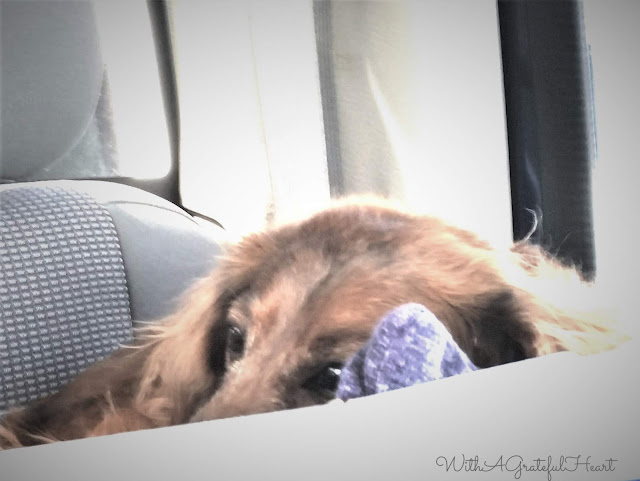 Time went by and the gift box began to show wear. Joey had stretched and moved so much that he eventually kicked out one end of the box! My sweetheart did what a lot of guys would do - he fixed it with duct tape! The box held on for a year, then a year and a half and a few more months. Recently, it seemed it was time to replace the box. But where would I find another big, square, sturdy box? Putting on my thinking cap - and arming myself with coupons - I headed to a fabric and craft store nearby. And I found the perfect box. It was more sturdy than my sweet mother's big gift box. It had a lid but that didn't stop me. I knew exactly what to do - and it was just right. So, the new gift box came home, was thoroughly inspected by Joey and then. . .he hopped in and settled down. He liked it! Lid and all. (Notice which box I chose. Perfect, isn't it?) 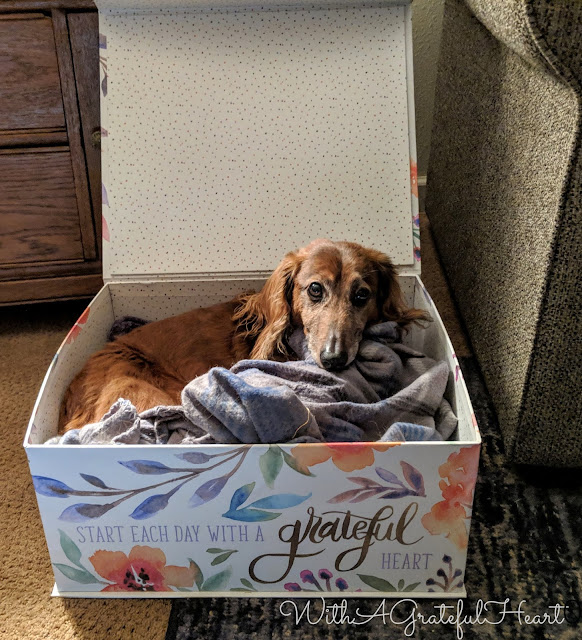 A day or two later - when he wasn't looking! - I carefully cut the lid away from the box. He knew immediately that something had changed but he checked it out and hopped right in - yes, he hops in - and he settled right down for a long nap. 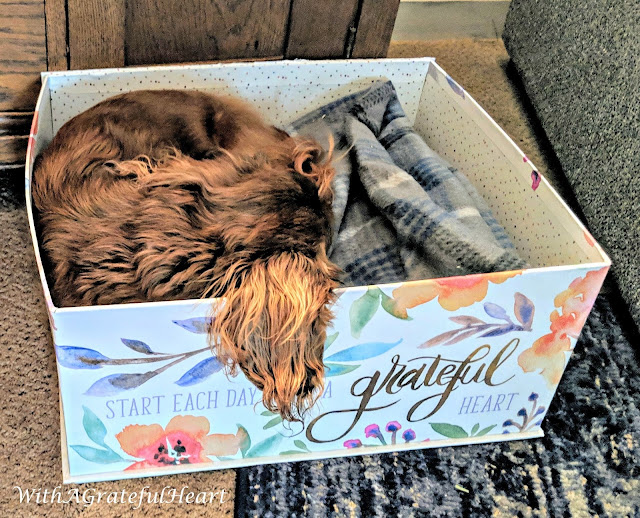 Sometimes he just sits in his new box with his head held high as he watches the world go by. . . 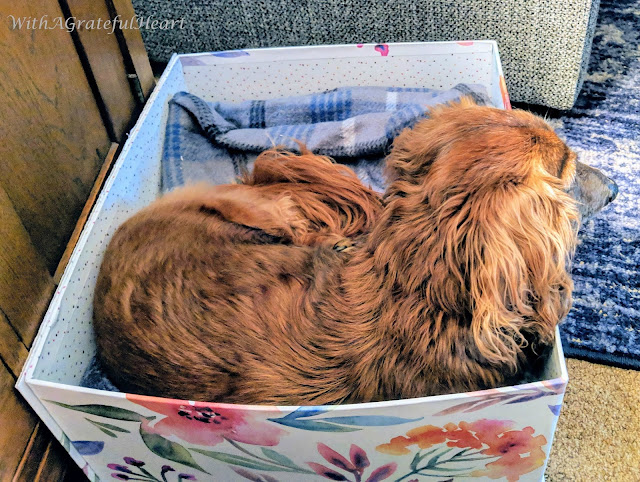 And sometimes he rests his head and pays attention to the world outside his little box. 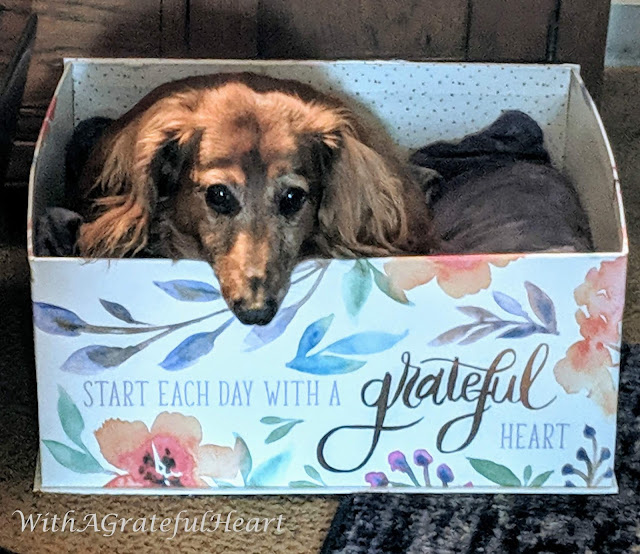 And when the mood strikes, usually when the sun shines, he hops out of his box and climbs up on the love seat to see what's going on outside. 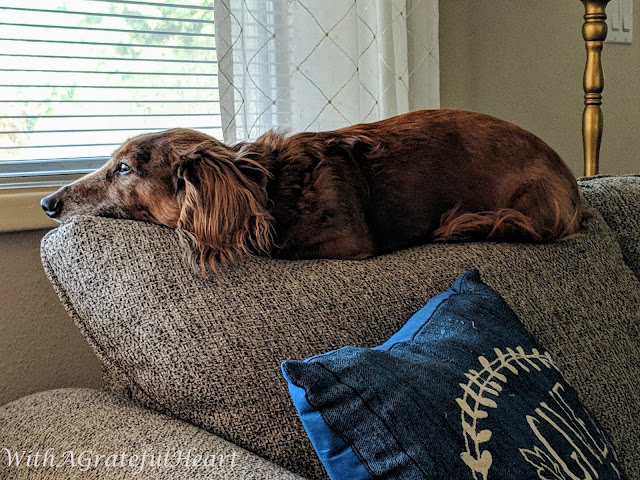 When there's nothing exciting going on outside he closes his eyes and goes back to sleep. 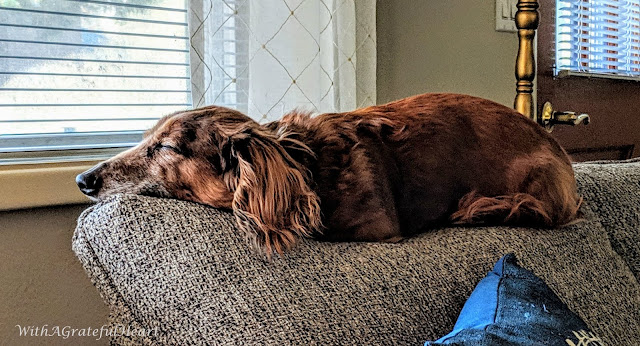 So, my friends, if you ever need a doggie bed you might want to try a gift box. If you have an extra big gift box lying around you might try to find a little dog who needs a bed!
Written by Adrienne at 6:47 PM 7 comments:
Labels: This and That
Newer Posts Older Posts Home
Subscribe to: Posts (Atom)