The Rest Of The Story

Recently I shared here about our trip to Eastern Oregon for my sweetheart’s annual deer hunting excursion with some of his family and friends who hunt together each year. Yesterday a dear family member reminded me that I left you high.and.dry! I promised to tell you the results of the hunt and share more of the beauty of that part of my home state. I said I would share it soon and I got side-tracked by life. So today I will return and finish the story.

My sweetheart hunted all weekend to no avail! While he was in the woods I prayed that he would be safe and get a big deer. On the last day of our trip – the day we were to return home – I stayed at camp and got our little cabin-on-wheels ready for the trip home. As I put things away and secured them for travel I asked the Lord if He would honor my sweetheart with a deer – any deer. Forget asking for a big one! My sweetheart and two family members were hunting together on the mountain and he had a certain time he planned to return to camp so we could begin the long trip home. When he didn't return at the appointed time I had several thoughts - either he had a deer ‘down’ and was preparing it for return to camp, he had lost track of time or, he was lost in the woods! I chose to believe the first thought. Awhile later he returned with a nice deer. Success! At last. Not a large deer but not a real small one, either.

Soon we had everything packed, said our goodbyes to family and we drove away from camp. You could say we were happy campers! But we were beginning to look forward to returning to all the comforts of home. Not far down the road from our campsite we left the forest area and drove through farmland. My sweetheart stopped to let me capture some of the sights with my camera.

He and Joey patiently waited in the truck.

I think I could have stayed right there for hours – there was so much to see. Just ahead, the Strawberry Mountains stood tall with a dusting of snow that gave a hint that winter wasn’t far away.

The old barbed-wire fence intrigued me and beyond the fence the sight of green fields refreshed my spirit after a few days spent in the snow. 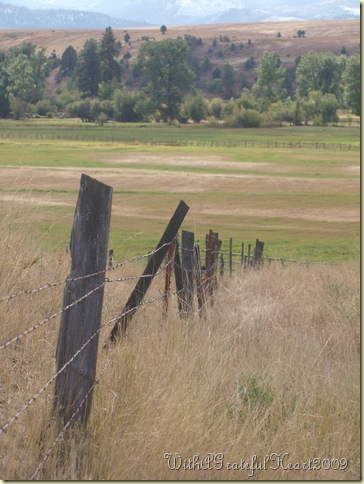 Across the road, an abandoned outbuilding caught my eye. The textures and colors captivated my imagination. I wondered who had been there through years past and what animals had taken shelter there.

After a brief stop in the nearby small town to empty the trailer tanks (less weight in the trailer is easier on the truck’s motor as we climb the mountains), we were on our way once again. Soon Joey decided to snuggle down on the seat beside us and catch up on his sleep!

It wasn’t long before we began the drive along the John Day River as it wound its way through the desert canyon.

High above, volcanic rock formations constantly changed in the sunshine and shadows. 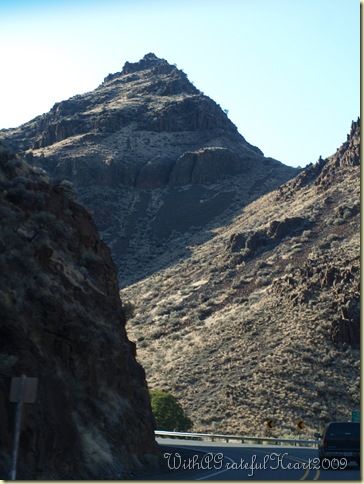 There was a beauty that is hard to describe and my heart longed to stay and explore and discover more about this land. 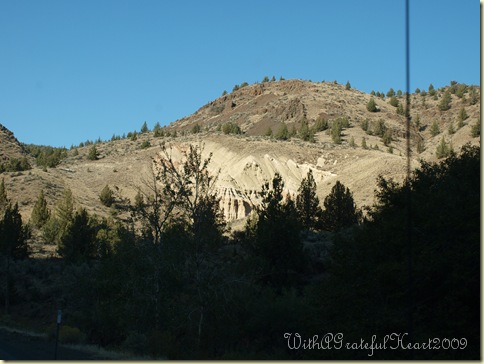 The late afternoon shadows danced on the rocks - they seemed to change with each minute that passed. Meanwhile, back in the truck - Joey slept on! 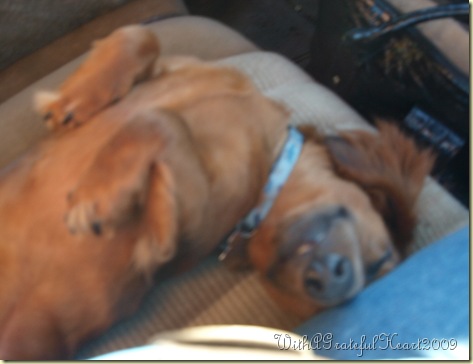 A ways farther to the west The Ochoco Mountains came into view. As we climbed toward higher elevation we found that we were once again in snow. Just a bit. 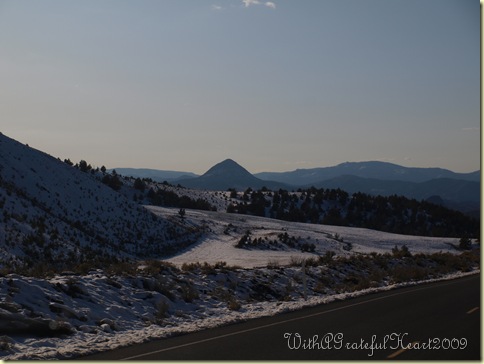 Just when I thought we had seen the last of the big rocks towering overhead, suddenly another one would appear. 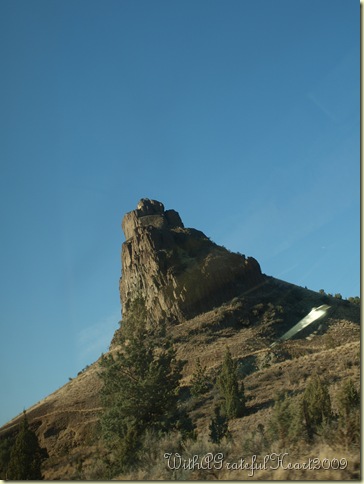 We continued to climb the mountain pass - higher and higher and around one corner after another. 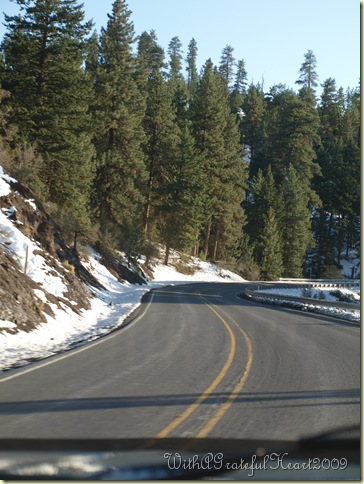 We drove on until we reached the summit and then began our descent down the other side. 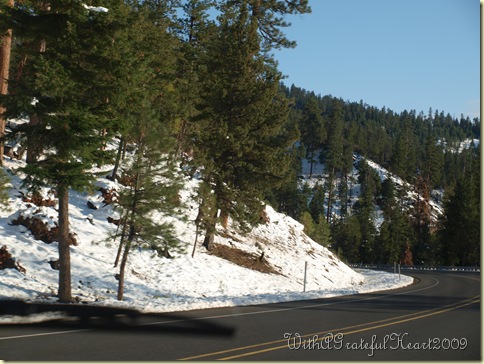 And then – once we had crossed the mountains and began to cross the plateau - there she was. In the distance. My favorite mountain. Mount Hood! Signs of home yet so far away. 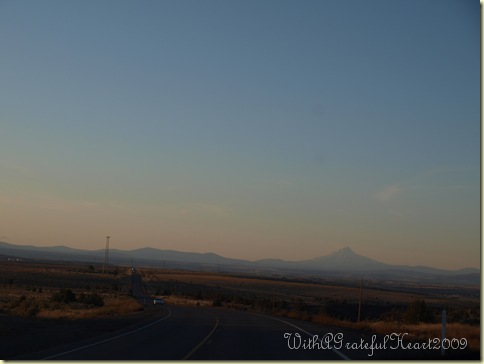 I know I must have smiled as we continued to drive across the plateau. The desert gave way to green pasture lands and the familiar sight of the Cascade Mountains – and ‘my’ mountain – meant that it wouldn’t be long before we would cross the last mountain range and be on the other side. Home. At last! 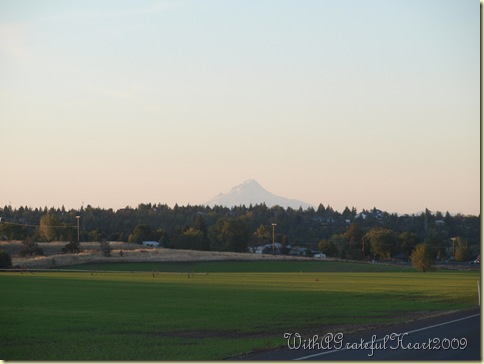 The evening shadows soon disappeared and darkness began to fill the countryside. Finally we reached the place where we planned to stop for dinner. We had talked and planned and waited to eat here before we continued on across the last mountains toward home. My sweetheart had told me all about the Black Bear Diner in the central Oregon town of Madras. He bragged about the food and we had saved this experience and waited in anticipation for our last meal of this trip together. 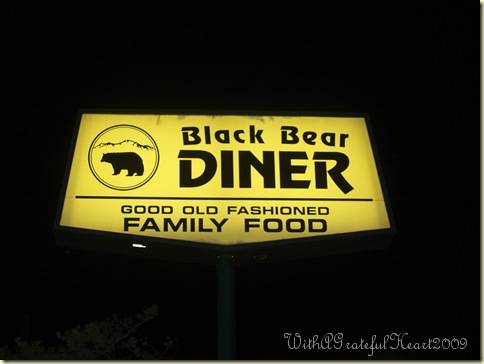 After a delicious dinner, as we walked to the truck, there it was! The harvest moon – just over the town to the east. 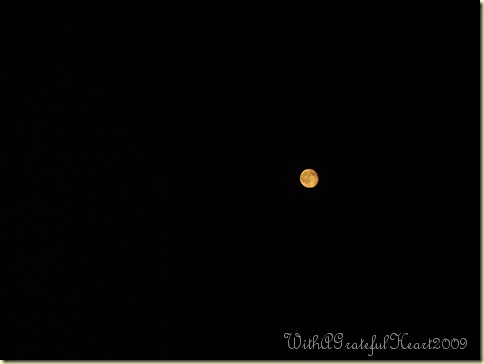 Soon we caught one more glimpse of the moon shining through the trees as we began to climb the last mountain range on the final part of our journey home. 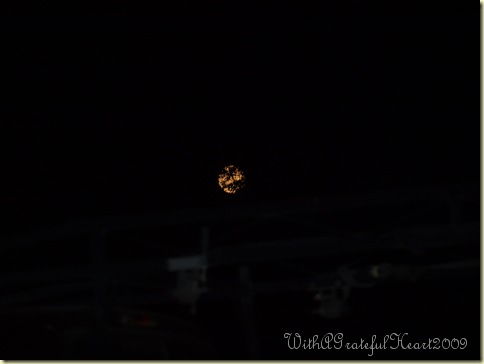 And then, finally, after a long, happy day together we were home! With meat for the winter, tales to tell and memories to cherish. And now you know the rest of the story!
Written by Adrienne at 7:58 AM
Labels: Out and About