My dear mother and I are off to Oregon City, 9 miles from our town, to shop at the 11th Annual McLoughlin Neighborhood Sale. There are over 300 families participating at 80+ sites throughout the historic district of Oregon City. (Only 57 sales are open today!) We have enjoyed this event the last two years and we have our sale maps and walking shoes on – we are ready to go! 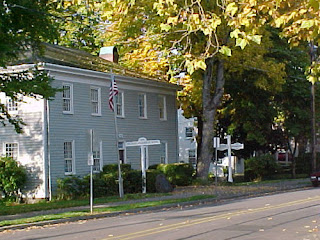 Dr. John McLoughlin's Home
(in the heart of the historic district)
Oregon City was the first incorporated city west of the Mississippi. It was established in 1829 by Dr. John McLoughlin as a lumber mill near Willamette Falls and later designated as the first capital of the Oregon Territory and the cradle of American government in the Northwest. 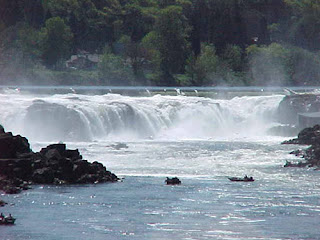 (For another breaktaking view of the falls - go here)
Dr. McLoughlin is known as the Father of Oregon. He was a Canadian born chief factor of the Hudson's Bay Company and a firm supporter of settlers who wished Oregon to be independent from England. He is credited with starting Oregon City. Photos courtesy of www.orcity.org/
Written by Adrienne at 7:55 AM
Labels: On Our Way