Life On The Rails – Homeward Bound

Yesterday I shared the first part of our train trip last weekend and the beautiful sights along the way. After our lunch in the park at the end of the line we returned to the train for the trip back to the depot. I told my family that I wanted to ride in the open observation car – the last car – so I could focus on taking photos along the way. My sweetheart and my family boarded the train to return to their seats and I boarded at the back and soon found my place in the open-air car. I chose to be in the back of the car where there were no seats so I could move around a bit. A few minutes later my sweetheart joined me and we found a good spot among the others who had the same idea.

I felt a bit sad to leave the wonderful little community that opens their hearts to the trainloads of people who join them each weekend, and I wished I could spend more time in the park and the museum and the gift shop we were leaving behind. While we waited for the train to pull out we were treated to a motorcycle ‘parade’ headed for lunch at the grange hall.

Just a few minutes behind them another ‘parade’ came our way – vintage and collectible cars. What fun! 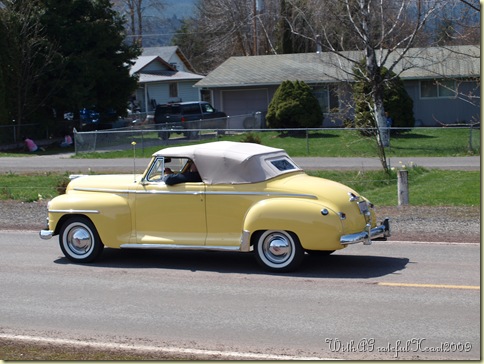 They passed the train and circled around behind to a grassy parking area near the grange. It was obvious that they planned to join the lunch bunch!

It seemed as if everyone on the train was watching and enjoying these wonderful, old cars.

And then, we slowly began to move down the tracks – rolling along and enjoying the clickety-clack on the rails and the sound of the whistle as we approached each crossing.

We passed acres and acres of fruit trees. . .

And homes and farms along the way.

After a while we had our last views of Mount Hood as we left the open spaces of the upper valley.

Then we travelled through forest lands where historic logging camps were set up throughout the area for the loggers, their wives and their children. Schools and churches and camp stores were part of their everyday life. When they finished logging one area they packed up their camp and moved to a different location. Many camps dotted the countryside – each one had a number. We passed the site of Camp No. 1 as we headed north toward Hood River.

At times we could see the engine and the railcars ahead as we wound our way through the woods. First one way. . .

We rode beside streams. . .

And made our way through another small community. . .

Where a man on his riding mower waited as we crossed the road.

We had been travelling downhill all the way back and soon we saw the track below us. A few minutes later we were down on that track.

But first we had to get to the switchback where things needed to change.

The engine had been pulling us - soon it would begin to push us! We pulled ahead of the place where the lower tracks joined the upper tracks. . .

The brakeman jumped off the train and turned the switch so we could travel on the lower tracks. Now the engine that had been in front of us was in the back. The open-air car that had been the last car was now the first!

Soon we were on our way again, moving through the lower valley, along the banks of the Hood River. The old pipeline on the other side once carried water to a now out-of-commission power plant downstream.

Somewhere along the way I took a picture of my sweetheart. . .

And he took one of me! (The wind was really blowing hard through the forest corridor!)

Before we knew it, we were approaching the end of our trip and it was time to walk through the train, return to our seats and rejoin my dear little mother, my cousin and her husband.

And then – we were at the train station again. Back where we had started that morning, four hours earlier. The group waiting for the next tour greeted us as we stepped off the train.

My family patiently waited for me to take a few more photos before we headed for home. As the next group boarded the train I walked beside the tracks to the engine.

Our engineer stepped off the train, talked to me and let me take his picture.

It was hard to say goodbye and leave the train, the wonderful old depot and the kind staff and people who made our day on the rails such a success.

As we travelled, a wonderful tour guide shared the history of the area and told about the geography, the wildlife and interesting bits and pieces of information that helped us understand the wonders of the Hood River Valley that we enjoyed so much. He had a great sense of humor and everyone enjoyed his personality through the day. He told us of upcoming excursions and he endeared himself to most everyone on board. During the last part of the trip he walked from car to car, talking to people and answering questions. My sweetheart and I decided we should retire in that area. When we were first married we lived not far from there and we love that part of Oregon. He wants to be an engineer - I want to be a tour guide! He would look great in an engineer's outfit. I can envision myself in period costumes – one for the different eras represented by each rail car – as I share my knowledge and friendship with everyone who rides along with me. Just before we headed home my sweetheart decided to get in my picture of an old caboose. Can't you just hear him say “All aboard?”

The best part of the day was the sweet words of gratitude shared by my dear mother as she tried to express how much this birthday gift meant to her. She said it was the perfect day – the train ride, the picnic lunch my cousin and I prepared and the time together with her dear ones. It brought back many wonderful memories of the days when she rode the train back and forth from her home in Southern California to college in Seattle. The train trip last weekend was like a cake - her enjoyment was the frosting on the cake!

You can find more information about the Mount Hood Railroad here.

With a grateful heart,

Written by Adrienne at 4:36 PM
Labels: Out and About