If You Give A Moose A Muffin

I have a book on my 'grandma' bookshelf - it's been a favorite of more than one of my grandkids. Maybe you've read it, too! 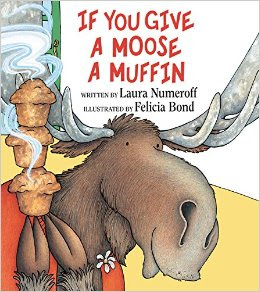 If you don't know the story, it goes like this: If you give a moose a muffin, then he wants jam to go with it. When he's finished he will want another. . .and another. . . until they are all gone.  Then he wants more so you go to the grocery store to buy muffin mix - and he goes with you, but he's chilly so he asks to borrow a sweater. Once he puts your sweater on he notices a button is missing so he asks for a needle and thread. While sewing he remembers the puppets his grandmother used to make so he asks for some old socks to make sock puppets.  The story goes on and on with the moose asking for things to make backgrounds for his puppet show. He keeps asking for things until he finds himself outside your house where he sees your mother's blackberry bushes. That reminds him of the blackberry jam - and if you give him the jam he will want a muffin to go with it!

That's kind of like what's happening at my house these days.  No, we don't have a resident moose and we aren't baking muffins.  Instead, we are beginning to deal with my dear, little mother's home and the many things she treasured through the years.  Easy, you say?  Not so!  It's like the moose in the book.  We have chosen some things that will move to our home.  We need a utility trailer to move a few big things. That's not a problem because my sweetheart owns a little utility trailer for such things.  So, what's the problem?  A few months ago we had some big trees removed from my mother's yard. In the process there was wood for our fireplace - more wood than our little wood shed could hold. Over the past few months the wood has stayed in the utility trailer that was parked in the back corner of our yard. So, here's the problem:

My sweetheart decided to enlarge our little woodshed so he can store the wood where it will be dry.  In the process he discovered that the fence behind the little woodshed has leaned and slumped and is affecting the roof of the woodshed.  He can't just add to the little woodshed without dealing with the fence situation.  So, he is outside fixing the fence.  He's replacing two tired and worn fenceposts, resetting the sagging gate and stabilizing things.  Then he can build the addition on the side of the shed and unload the wood from the little trailer and then we can start to move things from my mother's house.  Whew, that makes me tired just thinking about it.

Written by Adrienne at 4:33 PM
Labels: A Book Worth Reading, This and That