If you are of a certain generation you may have sung an old song during music class in the early years of your school experience. It goes like this:

My grandfather's clock was too large for the shelf,
So it stood ninety years on the floor;
It was taller by half than the old man himself,
Though it weighed not a pennyweight more.
It was bought on the morn of the day that he was born,
And was always his treasure and pride;
But it stopped short — never to go again —
When the old man died.
The song goes on to recount how the clock knew all the ups and downs of the grandfather’s life – but it stopped short – never to go again – when the old man died. While I always sang it with gusto during music class I thought the song was sad and a bit morbid – and I often wondered the purpose it served in our elementary school song books.  I didn’t think of it often until many years later, shortly after my own father passed away.  My grandfather didn’t have clocks that I remember – but my dad loved clocks, and he was a ‘grand’ father!  He would have had a house, or a museum, full of clocks if his budget had allowed that pursuit.  I don’t think he ever saw a clock he didn’t like.  He had more clocks in his home than most people I know but they were special clocks and very well displayed. There was a story behind most all of his clocks.  I’d like to share a few of my dad’s clocks and a bit of their story with you.  No, they didn’t stop the day he died - all are still keeping time quite nicely except for one that needs a bit of repair.  I’ll tell you about that one, too, because it has special memories for me.

A gorgeous ‘Victorian Gingerbread Clock’ stood on my mom and dad’s mantel for many years.  Right after I graduated from high school I had a job at a local azalea nursery where I met a young, married woman.  As we became acquainted she told me about her home and husband and children.  One day she told me about an antique clock she wanted to sell.  Immediately I knew my father might be interested in the clock so a day or two later he and I went to her home to look at it.  He bought the clock and proudly took it home where it stood on the mantel of his new home.  Over the years the clock chimed on the hour and the half-hour until one day it stopped chiming on the hour.  It also stopped chiming on the half-hour – but it did chime at twenty-five minutes after each hour.  Many times my dear mother would be somewhere in the house when the clock chimed and she would say, ‘It’s twenty-five minutes after something!’  It worked that way until after my father passed away.  One day my sweet mother met a clock repair man who cleaned and repaired the clock so it would chime at the right time again.  It sat on her mantel over the past years and was always a conversation piece when someone stopped to visit her for the first time.  This beautiful clock has found its way to my home now and it almost always brings a smile to my face when the chimes ring out through my home. 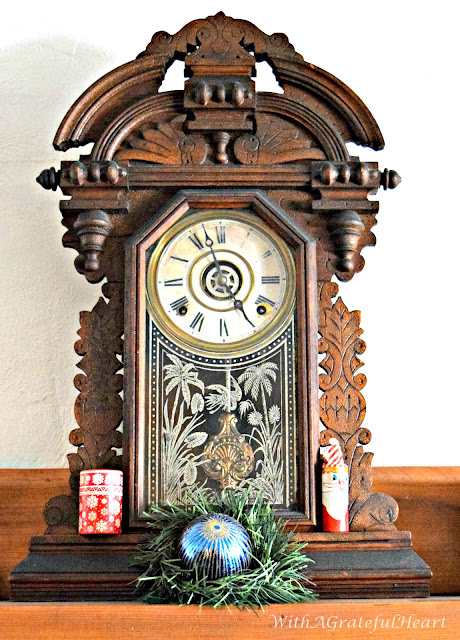 You may remember the days of S&H Green Stamps.  Many things in my parents’ home were the result of my mother saving Green Stamps over the years.  She spent countless hours looking through the Green Stamp Redemption Catalog as she carefully planned what she would get the next time we were near a redemption center.  This clock was one of many things that became a favorite in our home.  It has hung for many years in the closet of a bedroom that Mom and Dad turned into an office/library room.  They took the doors off the closet and used that space to add room for more of my mother’s vintage book collection.  This clock has also found a new home at my house.  It now hangs on the wall of a bedroom my sweetheart and I turned into our office and my creative space/sewing room. 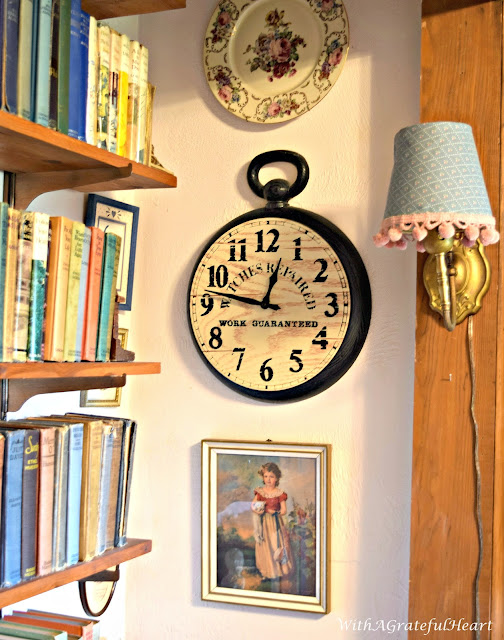 The purchase of one of my father’s clocks was the cause of ‘discussion’ between my parents.  My father was the pastor of a church in a small town in the Cascade Mountains of Central Oregon.  We often drove to ‘the valley’ for conferences and meetings.  It was one such day after a meeting in the valley that we stopped at a jeweler’s shop before we left the city to head across the mountains toward home.  I don’t remember the purpose of our stop at the jeweler’s shop, but I will never forget that day – or that clock!  I  still remember how it hung on a wall that was filled with all kinds of clocks.  I don’t remember why we went to that little shop but I do remember that almost the minute my dad walked in a cuckoo clock that hung in the center of the wall caught his attention.  And his heart.  By the time we walked out of the shop that clock had been paid for, removed from the wall, carefully wrapped and placed in a box that was handed to my father.  My memories of the trip home are vivid.  It’s as if I’m still that little dark-haired, dark-eyed girl in the backseat of the car as I listen to my parents discussion in the front seat - they were discussing the clock! It must have been sometime around early May because my father bought the clock for my mother - for Mother’s Day.  The problem?  She didn’t want a cuckoo clock for Mother’s Day.  Her heart was set on a beautiful teakettle she had hinted about many, many times.  In her disappointment, somewhere in her heart she devised a plan.  It shouldn’t have been a surprise when a month later she gave my father that beautiful teakettle for Father’s Day!  I have no memory of the teakettle but I know they both laughed a lot about it through the years and the truth was that my mother absolutely loved her cuckoo clock.  She loved it so much that when it stopped because a handmade, wooden gear inside had worn out she kept it on her kitchen wall and lovingly told the story of ‘her’ clock.  She wanted to have it repaired but she couldn’t find anyone nearby who could repair or replace the worn gear.  This is the clock doesn’t needs some repair.  It works, but not quite right!  It runs, it keeps time and the little cuckoo bird comes out at the proper time but he seems very confused and tired.  He comes out and begins his ‘chirp’ but he never finishes what he starts.  He says ‘cuck’ but can’t seem to find his voice to finish and add the ‘oo’ so he just sits there until someone lovingly reminds him with a slight push of their finger that it’s time for him to go back inside and close the door. 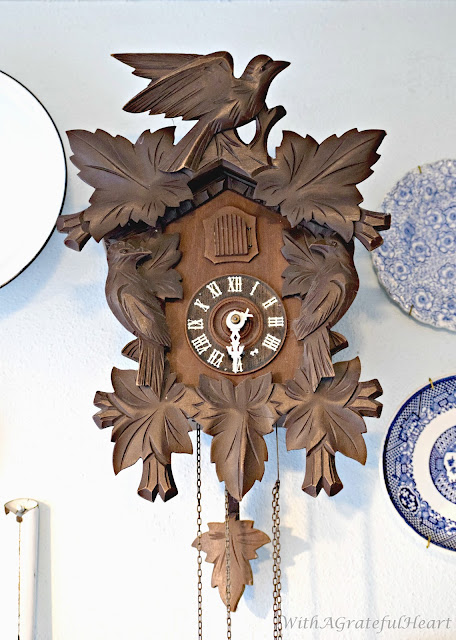 This clock will soon move to my home, too.  My sweetheart wants to have it repaired or he may try to hand-carve the cog and repair it himself.  He's good at things like that!  We are all very happy  that these clocks are still at home with our family.  I know my dear mother would be pleased – and I’m sure my ‘grand’ father must smile with pleasure to see our joy as we recall our memories of his dear clocks.

(The photos of each of these clocks were taken when the clocks were in my dear, little mother's home.  The photo of the mantel clock was taken when her mantel was decorated for Christmas.)