Take Me Out To The Ballgame

It’s a beautiful Spring day here in my part of Oregon and I was just fine working on some serious housework – until a few minutes ago when I decided to take a ‘breather’! I chose to sit down and catch up with a few blogs and everything was just fine until I read Cindy’s blog here. She shared a recent trip to the San Francisco Bay Area and suddenly I was ready to hop on the next plane out and head to my favorite City By The Bay again. Cindy met some girlfriends there and they had such fun together. As I looked at her photos and read her words I suddenly wanted to call my dear college friend, Mrs. B., and tell her to meet me there for a ‘re-do’ of our wonderful vacation together last summer in San Francisco.

Not long ago I shared here about my college reunion in San Francisco last August. The day after the reunion on our ‘old’ campus many of us who had gathered for the reunion when to the San Francisco Giants baseball game. Before game time we met in the parking lot where we had a great time over lunch – a tailgate party. It was such fun! 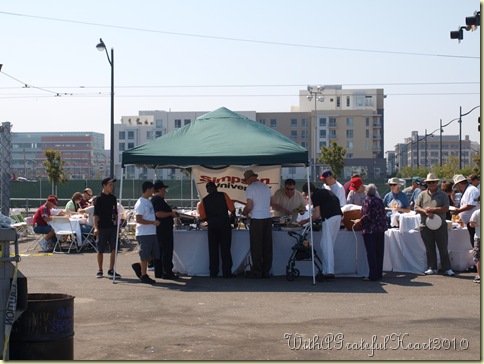 We had one last chance to visit with friends from our college days before we went to the ballgame. It was fun to have a bit of casual time to reconnect personally with several good friends from those days. And then it was time for the game. 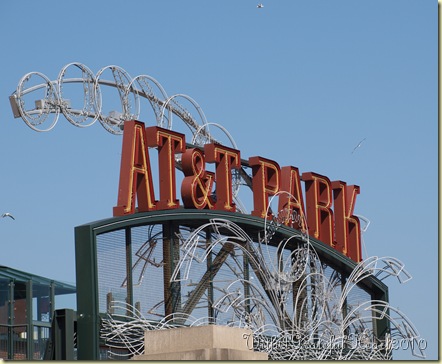 I thought I would feel sad watching the Giants play ball in their new park. When I was in college they played at Candlestick Park and that was such a ‘magical’ place in my memory. Through my years in college I had attended many afternoon games – when the Giants were playing at home, Wednesday afternoons were ‘Ladies’ Day’. Ladies could get into the game for one dollar per car! Since those were the days before seatbelts, we could really pack a lot of us college girls into a car and have a fantastic afternoon at the ballpark for just pennies each! And we did – believe me, we loved it! I learned a lot about baseball at Candlestick Park in those days so my heart longed to return there once again. I was afraid I would be disappointed with the new park but it didn’t take me one minute inside A T and T Park before the team spirit hit me full force. And when we found our seats and I sat down I could hardly believe my eyes. Not only did we have a good view of the field – we had an incredible view of San Francisco Bay, Treasure Island and the Bay Bridge on one side and Oakland on the other side! 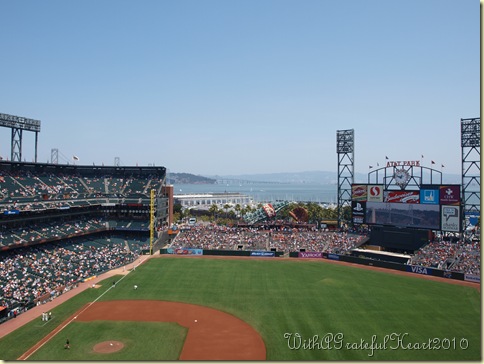 The game began and it wasn’t long before I realized I wasn’t at all disappointed to be here on a clear, sunny day at the ballpark. 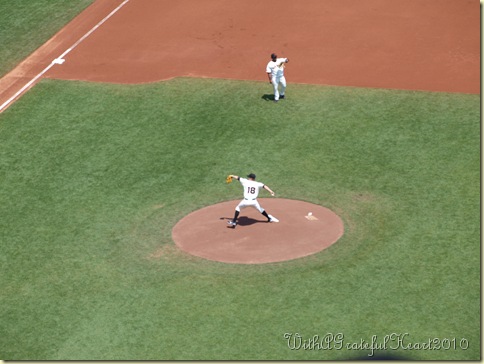 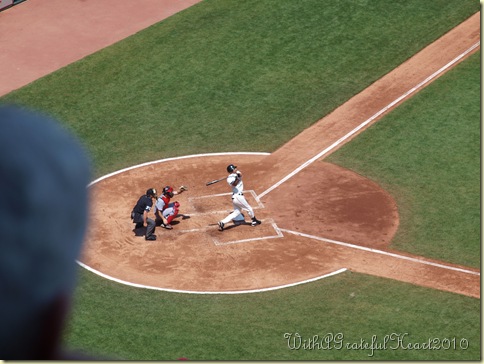 The big scoreboard gave us the feeling that we were close to the action! 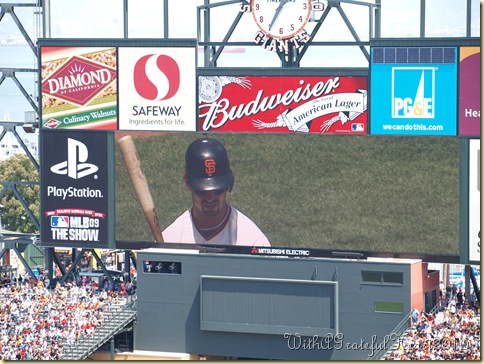 And at times there were special messages shared with the crowd! The Giants welcomed our group to the game and we loved it! 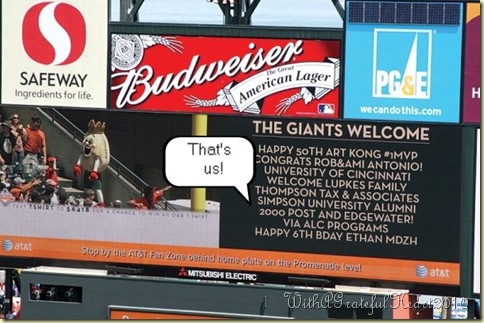 I was amazed by the number of boats that gathered on the Bay near the ballpark. 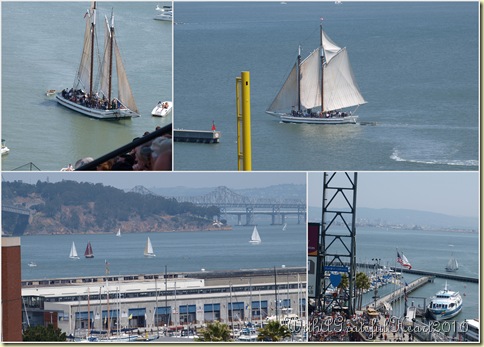 I enjoyed the ‘decor’ around the field. This bigger-than-life sculpture. . . 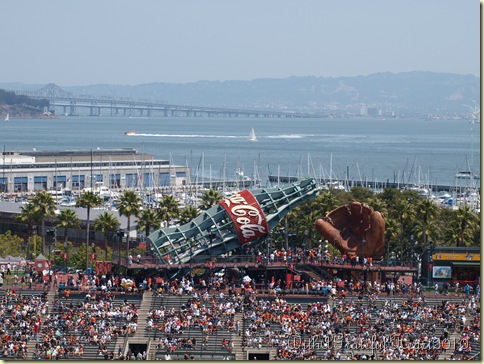 And the team flags around the top of the stadium. I found my Pacific Northwest team – the Seattle Mariners – right away. . . 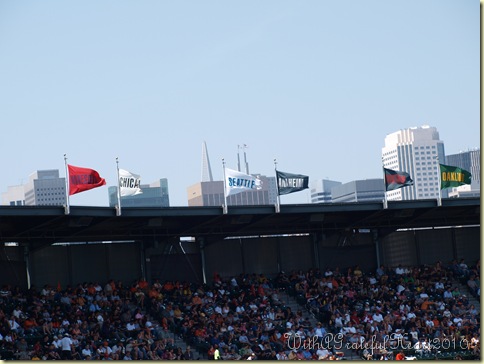 And the flag for the home team. 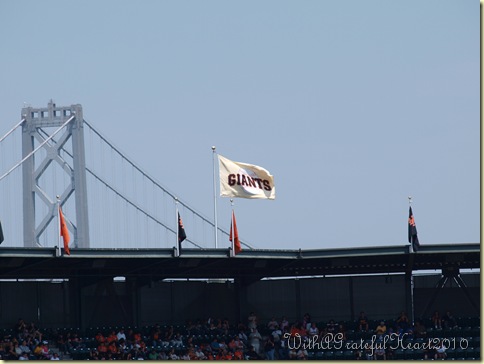 It was a gorgeous day and we had a great time cheering for our team and enjoying the sights and sounds of the game. 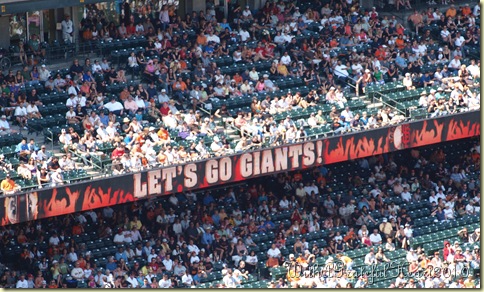 This little boy and his monkey, both dressed in Giants uniforms, were quite the fans. 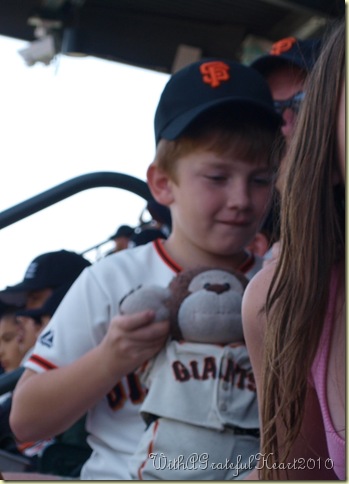 It seemed that the game had hardly begun and then it was over. It didn’t take long before we were ready to leave the stadium. 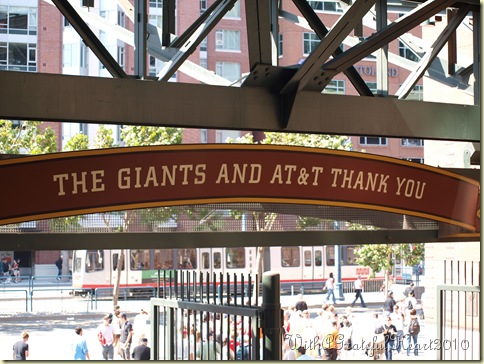 I felt sad as we walked through the gates and headed back to the car. The end of the game marked the end of our long-awaited, much-anticipated college reunion. In just a few hours my sweetheart and I would say goodbye to my dear friend and her hubby and we would head north as they drove south - each of us heading home with hearts filled with new memories, mingled with memories from years long gone. We would treasure this time forever and, once again, I would leave my heart in San Francisco.

And so, my friends, this afternoon, my heart called me back again to the City By The Bay. Thank you, Cindy, for sharing a glimpse of the place I love - the place I called home for a few years when I was young. The place where my heart will always long to return.