A Detour, News and A Grateful Heart 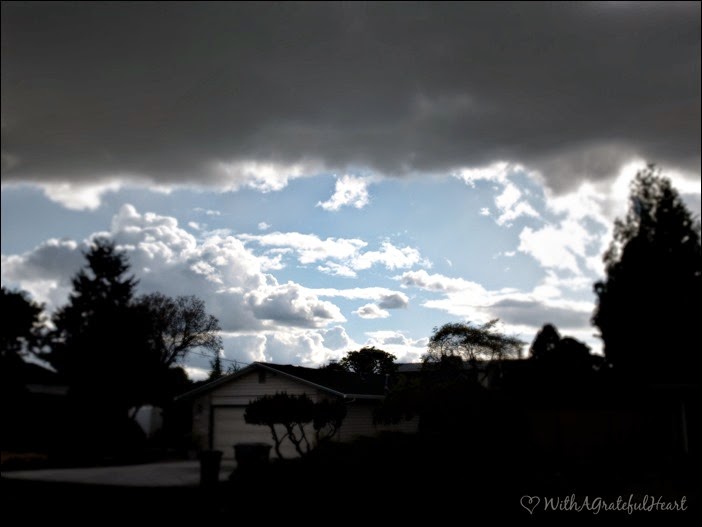 When I last shared with you on my vintage trailer blog (Daffodil's Journey), I said I was planning to leave that morning for a trip to spend the weekend with some of my camping girlfriends.  Well, it didn’t happen exactly that way!  Sometimes we don’t understand why plans are changed or delayed – and we may never know.  But I’ve learned to accept those changes as something God allows in my life for a reason.  That’s what happened last week just minutes before Daffodil and I were about to drive away for the weekend.

There’s something I haven’t shared here.  I am going to be a grandma again in the Fall!  You would think it would be news I would be shouting from the housetops, but I haven’t told many people.  Our daughter is expecting baby number five.  To say this was a total surprise would be an understatement.  This is a high-risk pregnancy because of her age and multiple problems she had when she was expecting our precious Miss H. five years ago.  This time we’ve been holding our breath almost from the beginning.  Every day without ‘bad’ news or events that make us believe this baby isn’t going to make it, well – that’s a day to breathe a bit easier.  In many ways it's one day at a time!   She is seeing a group of high-risk obstetricians and from day one their observations have been negative – doom and gloom for this little one.  There have been diagnoses of things that made our hearts ache and suspicions of things that were quite unnerving.  In this age of technology we can ‘see’ things that, in the past, we never knew about until our babies arrived.  Now we know things we wish we didn’t know.  But God hasn’t had the last word!  He is at work and we believe we just might be watching a series of miracles happening before our eyes by way of multiple ultrasound images.  Everything that has been diagnosed or predicted so far as ‘resolved itself’.  That’s what the doctors say, but I really believe we are watching God answer the prayers of many people for our daughter and her little guy.  Yes, it’s a boy!

I was literally on my way out the door – with car keys and purse in hand – ready to drive away with Daffodil when my cell phone rang.  Our daughter said, ‘Mom, I know you’re out of town, but you need to know what’s happening.’  It looked like the much-too-early birth of her tiny son was about to happen.  She was about to be taken to the hospital by ambulance.  My plans changed at that moment!  I knew there was no way I was going to take Daffodil and drive away.  A quick call to the camping friend I had planned to meet nearby so we could travel together and call to a dear friend who was expecting my arrival a couple of hours later – and all of my plans for the weekend were on hold.  I sat and waited for word.  And I prayed.  Oh, how I prayed!  Tears poured down my face as I thought of my dear daughter and the anguish she must feel.  And more tears fell as I thought of the tiny grandson I might not get to hold until some day in Heaven.  A phone call came and I was off to the hospital.  Actually, two hospitals before the day was over.  She was transported by ambulance to a large hospital where the neo-natal intensive care unit was ready, if he should be born. The news was more encouraging than we ever hoped to hear.  What had happened – what we could see and understand – wasn’t what it appeared to be.  The ‘symptoms’ of imminent birth were not that at all!  Tiny baby boy was still safe and sound, snug as ever in his fluid-filled sac.  Everything was exactly as it should be.  Needed fluid that surrounds him measured exactly perfect!  Contractions were not of the labor type and they weren't doing anything to be concerned about.  We were amazed!  The high-risk doctor at the hospital was very encouraging.  He sent her home for bed rest until her next appointment a few days later.

I took away a lot of things from that day when God changed my plans.  Again, I was reminded that HE is in control.  No matter what things appear to be, He sees it all.  And He knows.  I was reminded again how much my dear ones mean to me and that I wouldn’t choose to be anywhere else than with them in moments of crisis.  I was able to spend quite a bit of time with our oldest granddaughter and we shared our hearts in ways we’ve never done before.  Our daughter’s younger children were scared, so we sent grandpa to ‘rescue’ them and be with them. (He took them fishing!)  And, through it all, I kept remembering my dear father’s version of a Scripture verse that he quoted often.  Psalm 37:23 says, ‘The steps of a good man (or woman) are ordered by the Lord: and he delights in his way’.  My sweet dad always said that our ‘stops’ are ordered by God as well as our steps.  I’ve found that true more times than I can recall.  And that was what happened again last week.  I know God stopped me from heading south with Daffodil.  I had planned to leave earlier that morning but was delayed a bit.  The friend I had planned to travel with was also delayed.  I know His plan for me was to be here with my dear daughter and her family.  And I wouldn’t have it any other way!

It’s been over a week since that day when we all held our breath, waiting for news of a tiny, little guy who has already worked his way deep into this grandma’s heart.  I’ve seen many ‘still’ photos of his ultrasounds, but to stand beside the doctor and watch itsy-bitsy fingers move and the valves of a tiny heart open and close as they should – and to see this precious grandson moving and stretching before my eyes – was a gift to my heart.  A few days later there was another late night run to the hospital with even more scary things happening that also turned out not to be as they seemed.  The doctors assured my daughter that things that had been of concern were ‘shifting’ and ‘making themselves right’.  It wasn't an accident.  Not a coincidence!  I know it’s because God is shifting and settling things for her and her son.  She is taking it easy – obeying the doctor’s orders’ and all is still going well.

Early the next morning my sweetheart helped me hitch up Daffodil – again – and Daffodil and I headed south to catch up with the gals who were already enjoying time together at a gorgeous farm setting.  There’s so much I could share about my trip there, the time with my friends and the trip back home again, but I will save that for another time.  Early next week I will give you a tour inside of Daffodil.  She’s a beauty!  There’s more work to be done but she was just the sweet haven I needed over the weekend.I can’  t wait to share her with you.

As I look back on the events of last weekend, my heart is filled with gratitude.  I can see God’s fingerprints all over those days – and I have a much deeper sense than ever before what it means to ‘give thanks with a grateful heart’!
Written by Adrienne at 1:43 PM
Labels: From My Heart