A Treasure In My Hand

A very dear older friend is dealing with a terminal illness and my dear little mother and I have been helping her downsize and make her home accessible and safe for her now that she must use a walker. We want to help her stay in her home as long as possible. In the process she has given me several wonderful things that I treasure. She has known me since I was 3 years old, and she has always been like a big sister to me. She has had a special place not only in my life but also in the lives of my children and grandchildren. She was a missionary in Viet Nam for 16 years during the Viet Nam war era and she has many stories to tell of God's protection and provision for her and those she worked with. I'm sure there is much she doesn't tell! She was one of the last American missionaries to leave View Nam before it fell to the Communist regime. A few days ago she gave me a gift that I treasure. 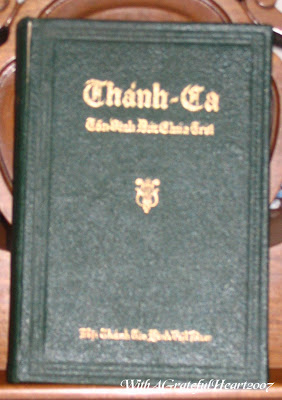 As soon as I saw it on her bookshelf I knew what it was even though I couldn't read the title -- I recognized the insignia on the cover. My father was a minister (he was her pastor in her younger years) and I grew up singing from a hymnbook with the same insignia. Hymns of the Christian Life. This book was her copy of the same hymnal in Vietnamese. While I will never be able to sing from this book it is a rare treasure that has special meaning to me. 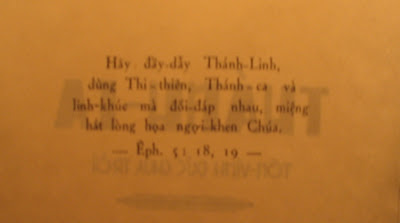 Just inside the cover is the instruction from Scripture that tells us to "be filled with the Spirit. Speak to one another with psalms, hymns and spiritual songs. Sing and make music in your heart to the Lord. . ." (Ephesians 5:18,19) I would love to have heard the missionaries and the Vietnamese congregation as they sang from these pages. 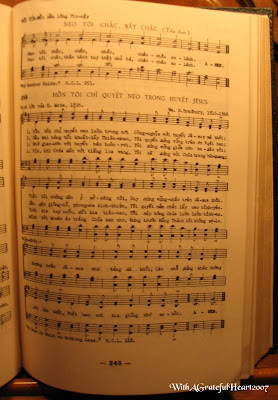 Page 245: "My Hope Is Built On Nothing Less." I don't recognize the words but the melody is familiar. 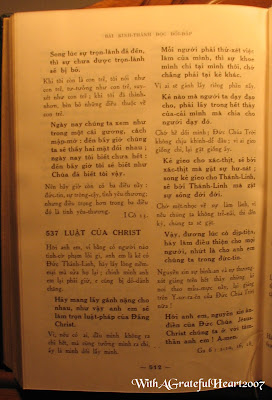 In the back, Responsive Reading 537 is from Galatians 6:1-10, 16, 18. Verse 9 tells us not to "be weary in well doing: for in due season we shall reap, if we faint not." I can't help but think of my dear Vietnamese Christian brothers and sisters who read these words. Many of them were required to stand strong and firm in their faith through unthinkable circumstances. How many of them lost their lives because they refused to "faint not" and remain true to their knowledge that they would reap Heavenly rewards?

A few days after I received this special hymn book I discovered an inscription in the front that brought back memories and moved me to tears. It says, "BLH from Ardel" - it was a gift to my dear friend from her friend and co-missionary, Dr. Ardel Vietti. Dr. Vietti was a single lady, a surgeon who was caring for and treating leprosy patients at a leprosarium located in dense jungle terrain near the provincial capitol of Ban Me Thuot, South Viet Nam. My dear friend, BLH, was stationed there during the early years of her missionary service before she was later transferred to Saigon. After she moved, on May 30, 1962, a group of about 12 armed Viet Cong entered the Leprosarium compound and abducted Dr. Vietti, Rev. Archie Mitchell (the Administrator) and Mr. Dan Gerber (a Mennonite peace missionary). It was believed that they were taken in order to treat injured Viet Cong forces. While the U.S. Government and their mission organizations worked fearlessly to locate and free them they were never able to do so. All three are listed as Viet Nam Prisoners of War.

I will never forget the morning I heard the first report of their abduction on the radio as I was getting ready for school. I went out into the living room and told my father what I had just heard. He immediately turned on the radio and searched until he heard the news story. As he listened he began to sob - his heart was broken! This news story touched close to home -- Rev. Archie Mitchell was my dad's roommate in Bible Institute, and he was a dear friend. Our family prayed daily through the following years for these three dear ones and their families who sacrificed so much for their faith.

Each time I hold this special book in my hands my mind goes to the dear people who lived and died for their faith in Viet Nam. I realize again that I know nothing of the real meaning of sacrifice. I am grateful that God keeps the records. He sees and knows those who do not get weary and 'faint' in well-doing and He rewards their faithfulness.

Written by Adrienne at 5:00 AM
Labels: From My Heart