Up On The Mountain

My sweetheart and I (and my puppy, Joey) returned home Monday evening from Clear Lake, high on Mt. Hood. We had an extended weekend in what is quickly becoming a favorite get-away place. We would have stayed longer if we could but life at home called us to return. We came back, rested and relaxed and ready to retire! Since that is not to be for quite a while we reluctantly returned to work and the routine of ‘real’ life. But we have dreams and plans to return in the near future – the very near future. 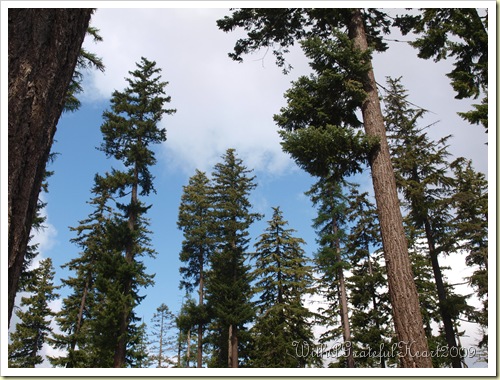 The skies were overcast when we arrived on Friday and we heard there had been rain showers throughout the day. It wasn’t long before very loud claps of thunder rolled overhead. Thunder storms had been predicted for the Cascade Mountains and they had arrived. The forecast was right. If you’ve never heard thunder in the mountains you’ve missed quite an experience. There we were – high on the mountainside by a beautiful lake and the thunder rolled like never before. It wasn’t long before the biggest raindrops ever began to fall. They sounded like hailstones as they hit the metal roof of our trailer! My sweetheart was not concerned at all – he had rain gear in the truck and he could put the ‘roof’ on the boat and go fishing! I, however, thought about the fact that – in spite of the rain – I would have to walk the dog! I could snuggle down in the trailer with my good book but it wouldn’t be long before duty called and I (who didn’t have rain gear but who has plans to get some soon!) would be ‘forced’ to go outside. The rain showers came. And they went. And then, early the next morning when a certain puppy and I opened the door and emerged from our warm cocoon-of-a-trailer – viola! There is was!!! Blue sky and a bit of sun beginning to peek through the clouds. 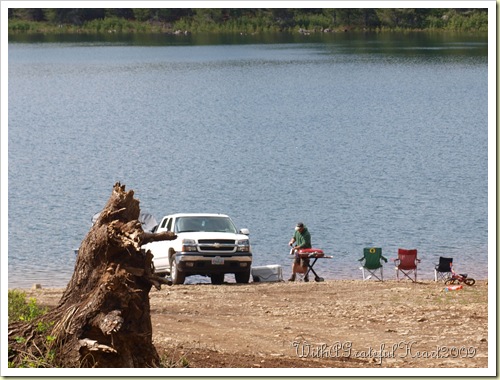 Joey and I began to walk toward the lake and there, at the edge of the water, was a father and his three young sons. They had driven to the lake for the day. The dad was cooking breakfast beside the water as the boys rode their bikes and played! Soon we heard him call the boys - ‘The blueberry pancakes are ready!’ Oh, I wanted to say I’ll be right there! Can you imagine? Oregon blueberry pancakes cooked on the grill right beside a beautiful high-mountain lake? I wanted to run back to the trailer, wake my sweetheart and tell him to hurry. The pancakes were ready! Instead Joey and I leisurely enjoyed our time outside and eventually we returned to our little cabin-on-wheels to prepare a delicious breakfast. Minus blueberry pancakes. You can be sure blueberries will be added to the trailer inventory by the next time we return to the lake! 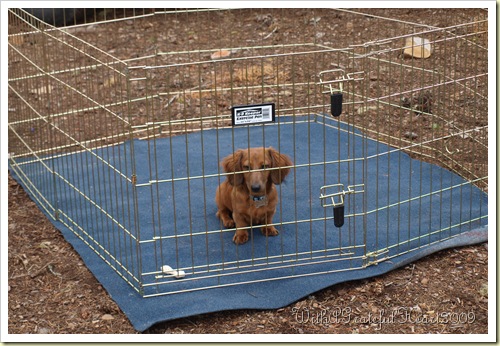 Joey had his own little ‘safe’ play area outside our trailer. A place to chew his chew-bone, play, rest and be safe. While I sat nearby to enjoy the fresh mountain air he chewed on his little bone for a minute and two and then decided to sit and look longingly at the world outside his little refuge. The next day he discovered that he could pull back the piece of carpet and begin to dig – dig and dig and maybe tunnel his way out of captivity! But he was never given the chance to put his plans in action. There was no escape for this little fellow! 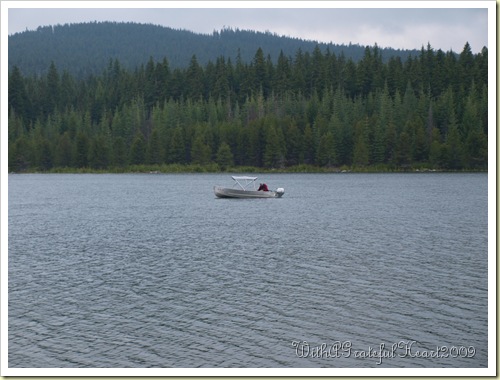 My sweetheart was anxious to get the boat into the water and check out the good fishing spots. He returned soon to retrieve a piece or two of additional equipment and he offered to take Joey and I for a ride around the lake. A scouting expedition! How exciting! 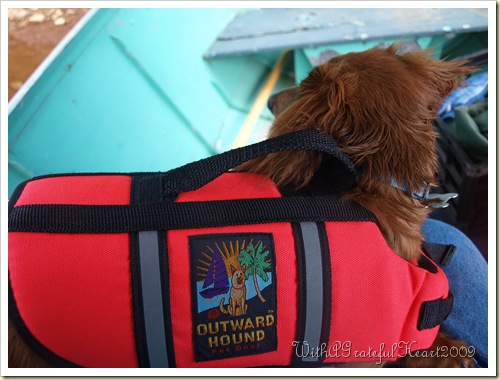 Joey had never been on a boat before but he was ready. He had his life vest and he was excited to go. I carefully instructed him in the proper way to wear his safety vest and how to conduct himself in the boat. He was a bit nervous at first but as long as he was with me he knew all would be well. The wind picked up and Joey and I shivered and snuggled a bit while under the cover of the boat ‘roof’. We quickly discussed our options and we asked my sweetheart to put the top down so we could enjoy the warmth of the sunshine. Not a problem. Soon it was done and we were enjoying a gorgeous, sunny day on the lake. Safe and warm together. 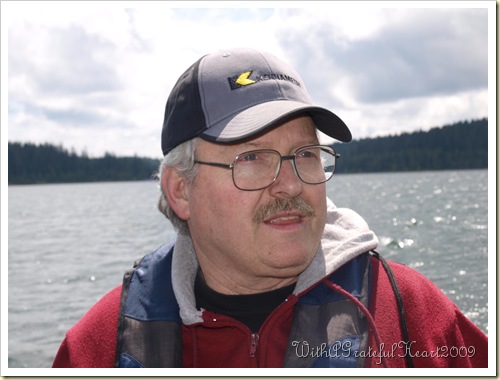 Our skipper was the best. My sweetheart could handle whatever came our way. We knew we were in good hands and we were happy to join him on this mission. 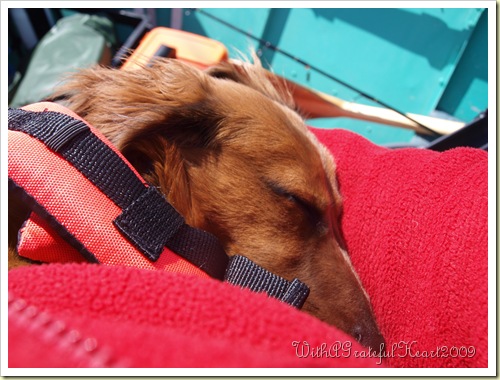 The warmth of the sunshine, the security of being held safe in my arms and the rocking motion of the boat on the water soon gave Joey a chance to take his morning nap. 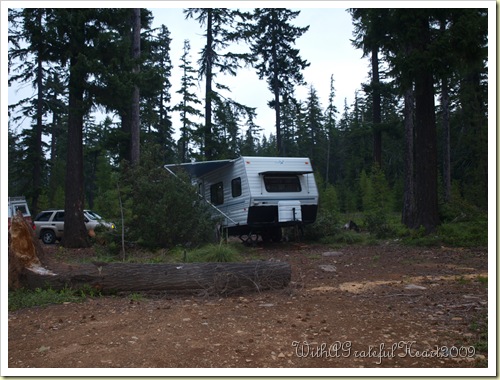 Before we knew it our excursion was over and we could see our camp site again. Joey and I were ready to move on to the next pressing business. Play time and another nap for the puppy, a good book for me and fishing for my sweetheart. Joey and I were invited to ride along for the fishing trip but we didn’t want to disturb the fish – or my sweetheart – so we politely said ‘thank you very much’ but we have a lot of things to do. Birds to watch, ants to chase, tree toads to ponder and important things to check out! 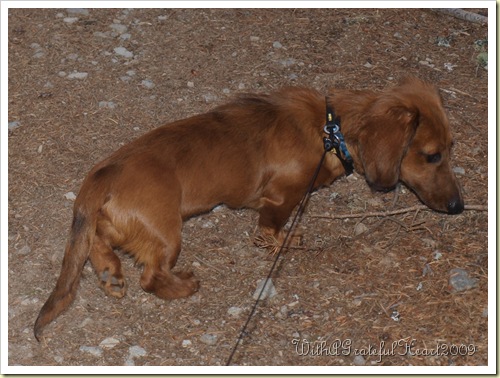 So much to do – so little time. Oh, what fun we had in the woods. Each of us enjoyed our time away and we can’t wait to go back again. When we do I’m sure we will pick up right where we left off. Resting and relaxing and not worrying about a thing. Except maybe what happened to those pesky squirrels!
Written by Adrienne at 7:55 AM
Labels: Out and About