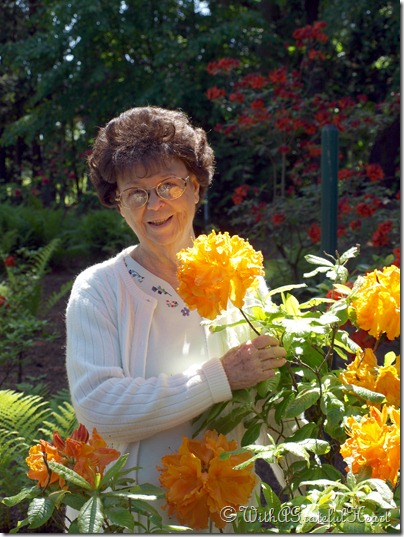 This Mother’s Day weekend I spoke at a Mother’s Day Brunch in a neighboring community.  My dear, little mother was able to go with me.  I introduced her and told the ladies in the audience that I wanted to tell them about my mother.  She didn’t know what I was going to say.  At first she wondered but once I started sharing the following words she was a proud mother, sitting straight and tall and smiling with pride.  Pride in me.  Pride in a job well done.  Here is what I shared.  The words are not mine alone – I adapted them from a reading I found some time ago.

I had the meanest mother in the whole world. While other kids ate candy for breakfast, I had to have cereal, eggs or toast. When others had cokes and candy for lunch, I had to eat a sandwich. As you can guess, my supper was different than the other kids' also. I had to sit at a nicely set table with the rest of my family and practice good manners and participate in pleasant conversation around the table.

My mother insisted on knowing where I was at all times. You'd think I was on a chain gang. She had to know who my friends were and where we were going. She insisted if I said I’d be gone for an hour that I’d be gone one hour or less--not one hour and one minute.

The worst is yet to come. I had to be in bed at a certain hour each night and up early the next morning. I couldn't sleep till noon like some of my friends. While they slept, my mother actually had the nerve to break the child-labor law. She made me work. I had to clean my room, do dishes, make my bed, learn to cook and all sorts of cruel things. I really think she laid awake at night trying to think up things just to make me miserable.

By the time I was a teen-ager she was much wiser - and my life became even more unbearable. If I spent the night with a girlfriend, can you imagine she checked on me to see if I were really there? I never had the chance to elope to Mexico. That is, if I'd had a boyfriend to elope with. I forgot to mention, while some kids were dating at the mature age of 12 and 13, my old-fashioned mother refused to let me date until the age of 15 or 16. Fifteen, if I dated only with a group of friends from church and we went to a church youth group function. My mother was a complete failure as a mother. I actually graduated from high school and attained some higher education. I never committed a crime or was arrested. And who do I have to blame for the terrible way I turned out? You're right, my mean mother. Look at the things I missed. I never got to march in a protest parade, take part in a riot and a million and one other things that other people did.

She made me grow up to become a God-fearing, educated, honest adult. With this background, I tried to raise my two children. So, I stand a little taller today and I am filled with pride when I say that my children used to call me mean, too. Because, you see, I thank God, He gave me the meanest mother in the whole world.

And that’s why I am who I am today.