My house is a very short distance from a major river in Western Oregon.  The Willamette (pronounced will-a-met, the 'a' is like the 'a' in apple) River.  If you are in my hometown and ask for directions to the Willamette River you will be directed down Holly Street – right past my house.  Holly Street ends at the river.  Less than ten miles downstream from my home the river makes an abrupt change.  A major waterfall attracts visitors and residents alike.  Willamette Falls has been an attraction for hundreds of years.   Oregon City, the first incorporated city in Oregon, was built on the banks of the river near the falls.  Many years ago the highway department built a nice viewpoint and you almost always see someone stopped there to look at the falls.  The falls seem to draw attention no matter the time of year or the weather.  In the summer much less water goes over the falls than in the winter.  So far this year we’ve had enough rain to make us wonder if the falls will change much at all this year.  A recent visit to the falls amazed me – the river was still very high and there was so much water flowing over the rocks below.  It was almost enough to make you question whether or not it’s really a waterfall! 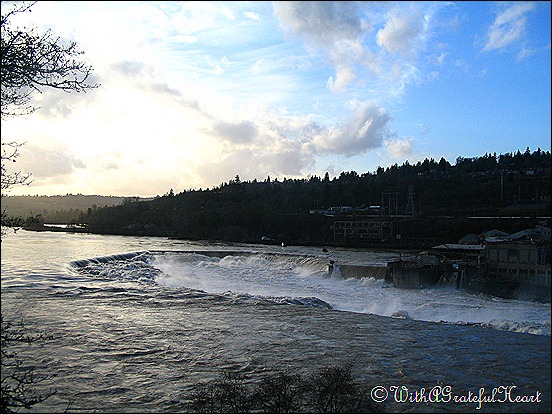 Willamette Falls is a natural waterfall that is shaped like a horseshoe. It’s the largest waterfall in the Pacific Northwest and the second largest in the United States behind Niagara Falls. It is the eighteenth largest in the world by water volume. 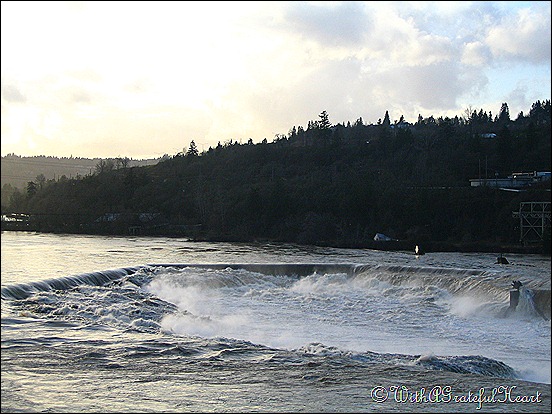 You can read more about the falls and its effect on Oregon history here. 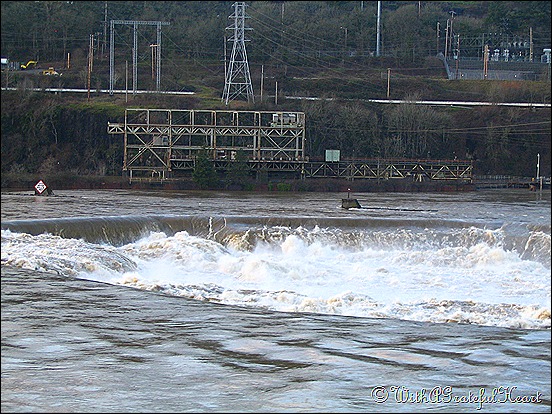 Early power plants produced electricity to light the streetlights of nearby Oregon City.  Not long afterward it also pumped enough electricity over fourteen miles of wire to light fifty-five street lamps in downtown Portland, twelve miles down river.  The T. W. Sullivan plant was the first major long distance hydroelectric power plant for commercial transmission and distribution of current in the United States.  It is still in operation.  This historical marker tells some of the history at the viewpoint beside the highway. 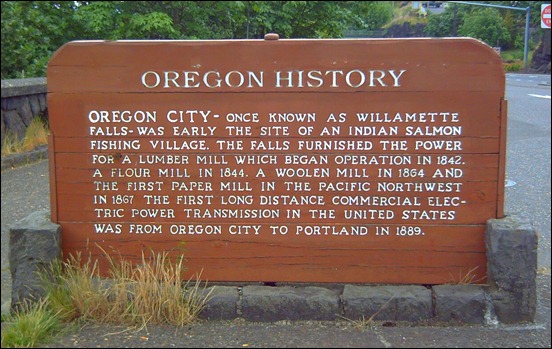 I love the view of the falls from down river a ways.  I always enjoy the beauty but I often wonder what it was like before we began to settle here and build all around it.  It must have been amazing!  There is a fascination and a bit of mystery that surrounds the mighty falls.  At times it almost seems to stand still as it rages on toward the sea. 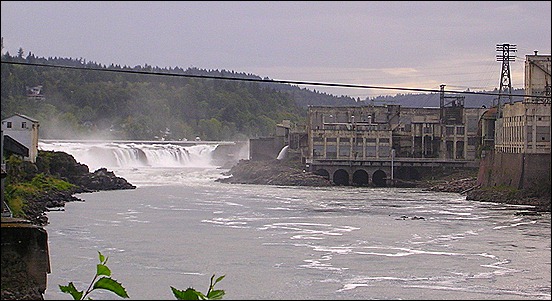 A favorite view of mine: seen from the other side, on a sunny day, looking across to Oregon City with Mt. Hood in the background. 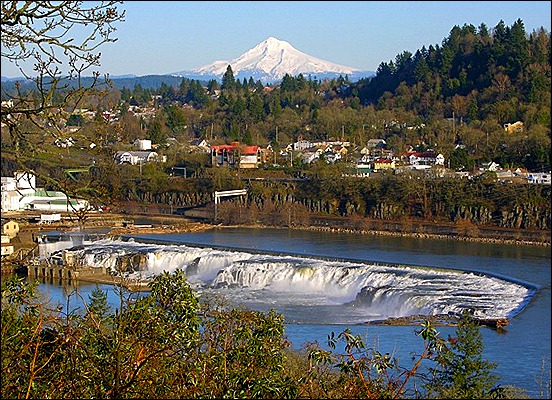 Written by Adrienne at 3:23 PM
Labels: Out and About, Pieces of History