Down On The Farm – In Living Color

Yesterday I shared black and white photos of a wonderful, historic sheep ranch in Eastern Oregon. The James Cant Ranch is in the middle of the John Day (Oregon) Fossil Beds. There are three locations to visit in the National Monument – all worth spending time to drive through and see the displays, historic sites and the awesome scenery. Sheep Rock is the center of one area – it’s one of the many beautiful landmarks in the John Day Fossil Beds National Monument. 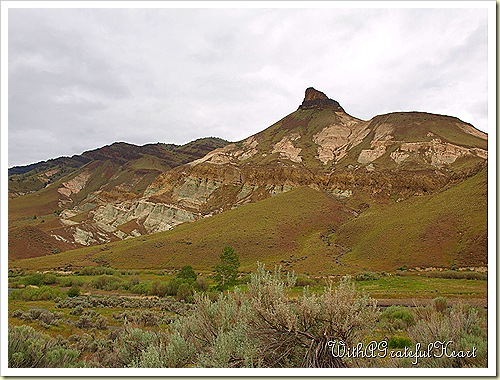 When we first saw Sheep Rock we had no idea of the beauty that was beyond this point. Like so many other locations, we didn't know if this was all we would see of this mountain or if there was more. We made many stops for photos along the way and it didn't take long to learn that there would probably be much more ahead!

The James Cant Ranch, open to the public, sits at the base of the mountain. The barn and house are open and provide an amazing look back into life in an earlier time. The house was built in nineteen eighteen. James Cant was a Scottish immigrant who settled in the John Day region with the dream of becoming wealthy by raising sheep. Long before he arrived, American Indians called this place home. The land was marked and mapped by fur traders and explorers in the early nineteenth century; they paved the way for soldiers, miners, cattle ranchers and merchants. Their lives intertwined with the John Day landscape to create its rich history and character. 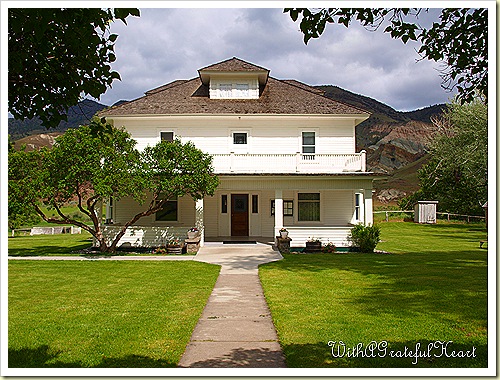 James Cant came to Oregon in nineteen hundred and five. He herded sheep on a nearby ranch and was soon able to send for his sweetheart in Scotland. James and Elizabeth purchased this ranch and soon built this wonderful home where they raised four children. 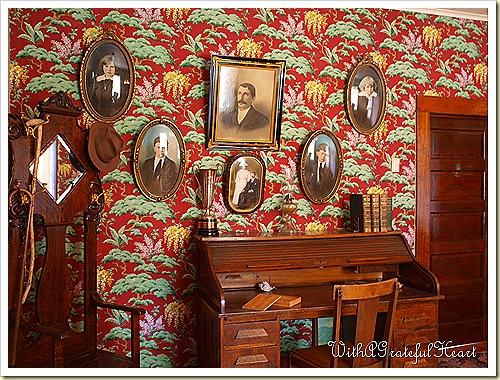 The furniture on display in the parlor still belongs to the Cant family. It seemed as if we should have a seat – it appeared that tea was about to be served! 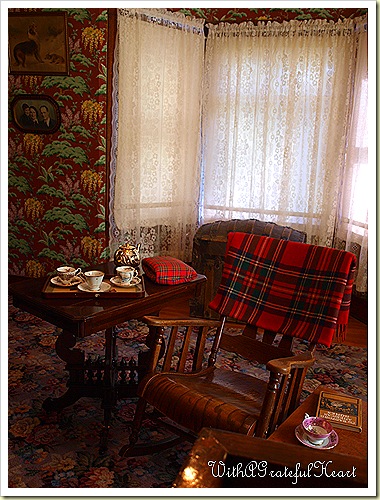 Seven bedrooms housed the family, the school teacher, visitors from neighboring ranches and travelling laborers. School was held here until the mid-nineteen twenties. The Cants hosted many suppers and dance parties. Passing travelers often found hospitality here and it was not unusual for Mrs. Cant to serve dinner to twenty or more. She once said ‘when she leaves this earth she will be holding a dishtowel when she meets Saint Peter at the gate.’ 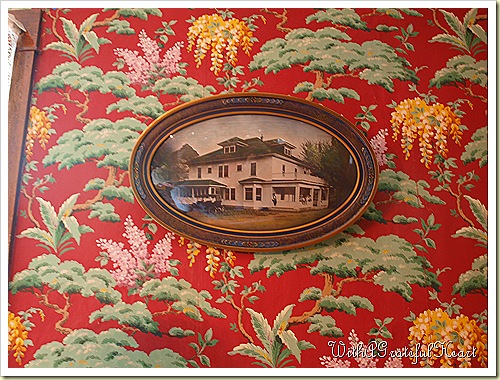 Elizabeth Cant spent much of her time in the kitchen. She sometimes said that when a woman got married, she’d ‘married the kitchen stove.’ She was always the last to sit down at the table, and she kept watch to make sure that no one’s plate was empty. The house is open for tours four days a week – it was open to walk through some of the first-floor rooms but we were not there on a tour day. I’d love to go back and see the entire home – all three floors. Next time, perhaps! 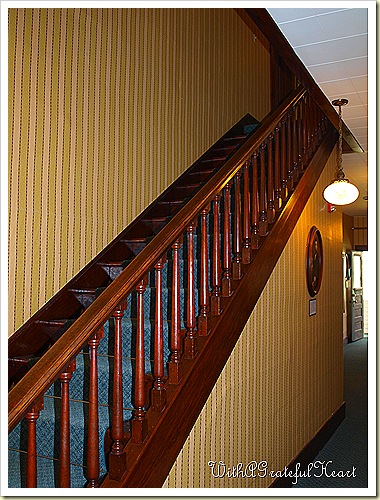 A large screen porch wraps around part of the side and the entire back of the house. Summer temperatures climb into the hundreds and the porch was often the sleeping place for the family, ranch workers and neighbors who needed a cool place to rest. 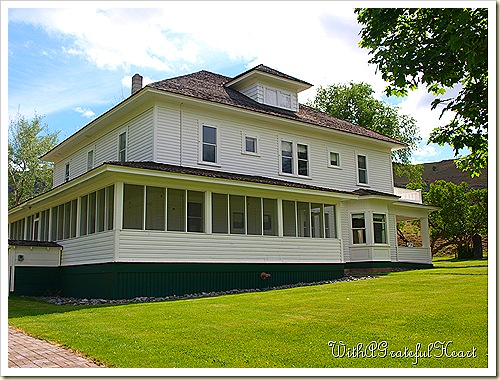 When I stepped out onto the screened porch I knew if I lived there I would want some comfortable chairs, a table or two and everything needed to enjoy a cup of tea out there. And I would spend a lot of time there with a good book and lots of time just sitting to take in the incredible view. 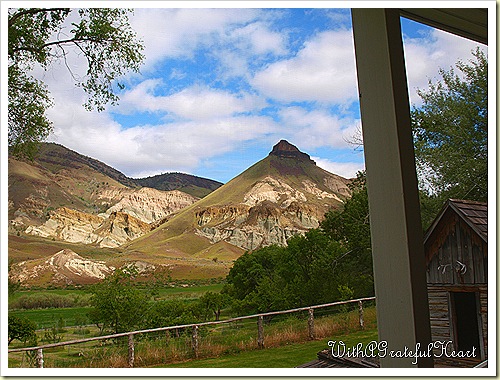 Remember the chicken coop I showed you yesterday? 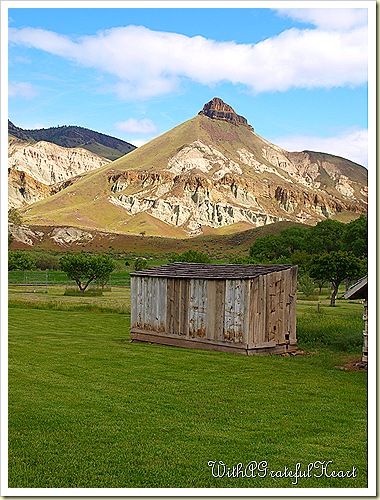 Look at the view the chicken had from their ‘home’! (The fencing around the trees in the orchard is to protect the trees from the deer.) 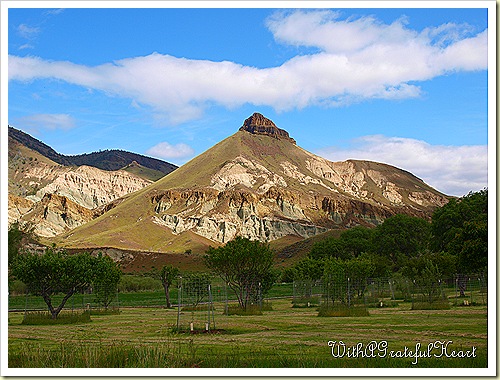 I shared bits and pieces of the working area of the farm yesterday. The barn was huge – I’d never been in a barn so big! 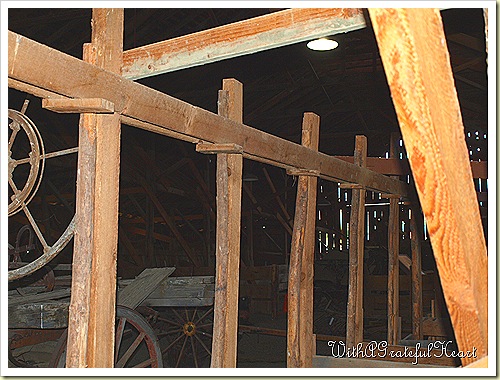 I wish I had counted the sheep stalls – there were so many. 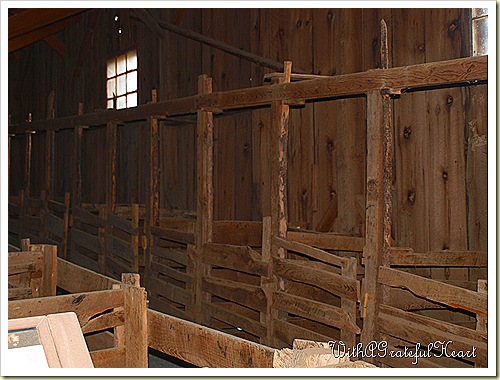 The ranch is on the banks of the John Day River. James Cant bought the property across the river for his oldest daughter to homestead and raise sheep. The little cabin he built for her is nestled at the base of the gorgeous hills. 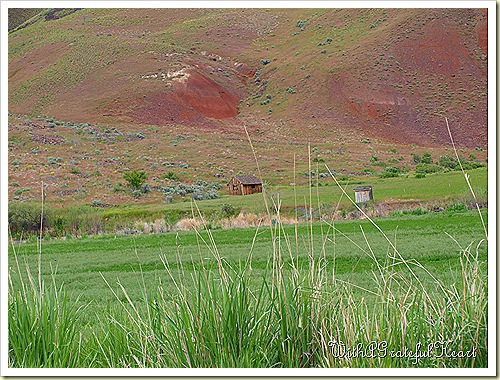 We enjoyed walking along a path that led past the orchard to the edge of the river. 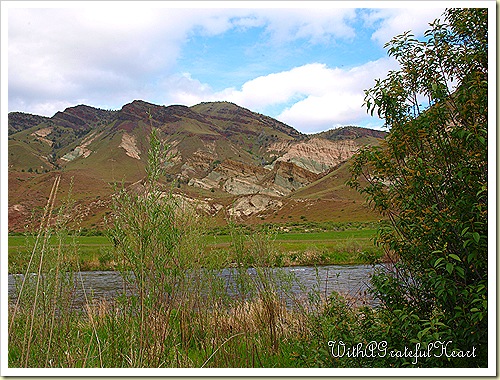 Near the river bank we were glad to find a bench in the shade of a big tree. My sweetheart and Joey found their place to rest a bit after the long walk. 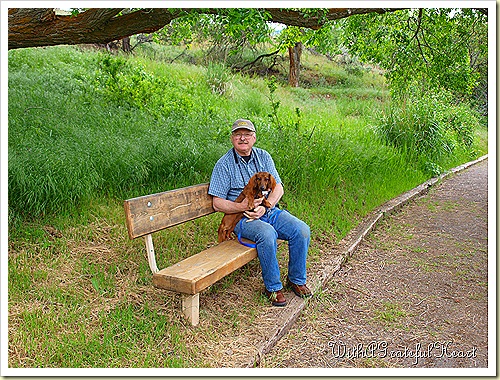 We enjoyed sitting in this peaceful place, listening to the sounds of the orchard and river and a chance to take in the quiet beauty all around us. 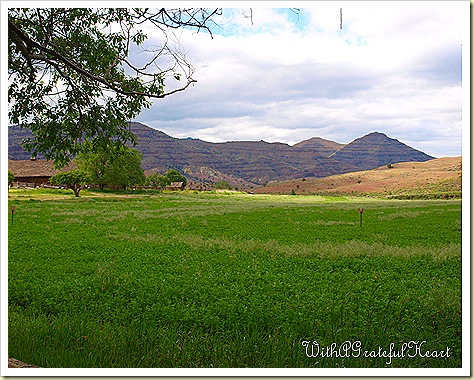 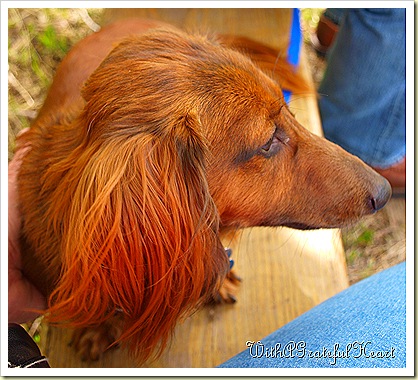 This was just the start of our exploration of the John Day Fossil National Monument. Much more waited for us that day – and for several others days ahead. Each of the three locations open to the public has its own personality and unique features. All along the way to and from each place – and wherever we drove and stopped – the beauty of unbelievable rock formations and layers of color waited. When we left the ranch we had only just begun!
Written by Adrienne at 8:35 AM
Labels: Out and About