Winds of the Mighty Columbia

I have shared here and here about the trip we took through some of the beauty of Oregon with family from out of state recently. We drove east from Portland, stopping along the way a few times before we arrived in Hood River, a picturesque town on the south banks of the mighty Columbia River.

Hood River is known as the windsurfing capital of the world. Before this sport arrived here this area was best known as a rich agricultural spot - growing luscious apples, pears, cherries, peaches and other fruits, and for the view of the majestic snow capped peak of Mt. Hood. The fruit is still grown and processed here but usually it's the action on the river that captures the attention of the casual observer. Hood River has become the destination of choice for wind surfers from around the world. Stiff prevailing winds from the Columbia River Gorge - best during the middle of the day - and the Columbia’s strong river currents combine to create a kind of wind tunnel that makes for world-class windsurfing and kitesurfing conditions. It's not necessary to participate in this sport to enjoy it. You can watch the "boardheads" at play from Columbia Gorge Sailpark or from several public areas along the waterfront.
We stopped on the shores of the Columbia River to watch the action on the waves and we were intrigued with what we saw. 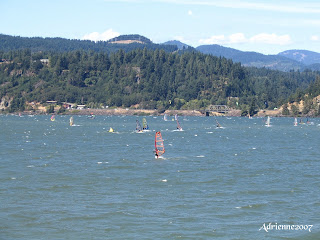 A small part of the action 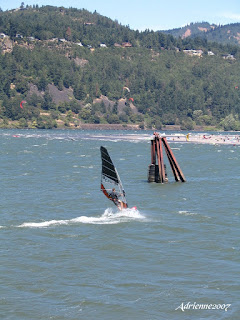 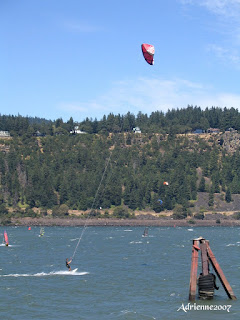 As I stood on the banks of the river and watched the surfers above an older lady walked over and stood near me. I spoke to her and she told me she was 80 years old and her 84-year-old husband was watching from the car behind us. They are intrigued and fascinated by the sport and they go there often to watch the activity. She said she wishes this sport had been part of their town 50 years ago because she would have been out there on the waves! She stood and watched and longed to experience the thrill that seemed to fill the hearts of the participants.

A few minutes later an old pickup parked nearby and my sweetheart and I, along with our family, watched two young men unload their equipment. We walked over to where they were assembling their gear and watched in amazement. We were fascinated and began to ask questions. This young man and his buddy told us a lot of basic information about windsurfing. They told us some things to watch for and how to spot the difference between a novice and pro. We followed them to the edge of the water and observed as they became part of the action on the water. 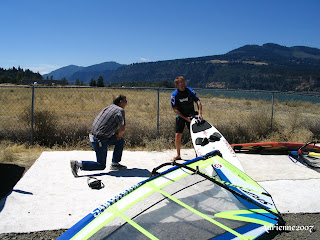 An up-close and personal lesson 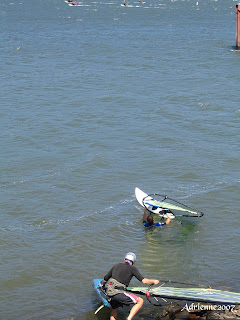 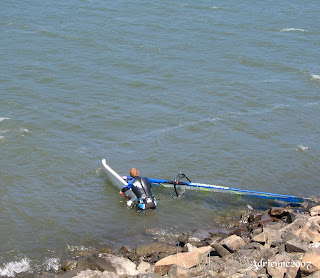 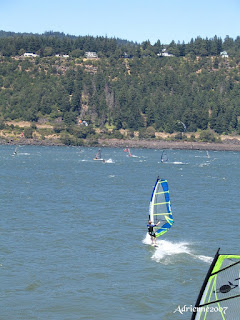 Riding the waves at last

We watched until the pair were out of sight and when we drove away from the river that day we were a bit wiser and understood more about what we had just seen. If you ever stand on the banks of the river and watch the windsurfers you won't see us out there - but we might be standing somewhere nearby, watching and learning a bit more about the fascination of riding the waves of the Mighty Columbia River!

Written by Adrienne at 6:42 AM
Labels: Out and About