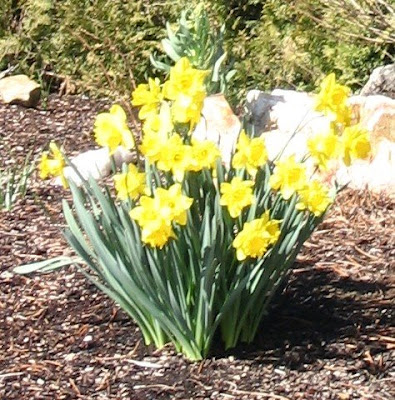 Every year when Spring returns to this part of the world my heart takes me back to a special time many years ago. My sweetheart was a youth pastor when we met and married. After our wedding, I moved from my home four hours away to his home in the mountain area of Central Oregon. We didn't think we would be there very long. My sweetheart felt it was nearing the time for him to leave the wonderful church where he was youth pastor. Time to become the pastor of a congregation somewhere here in our state. Time to move on. We didn't know where that would be but we were willing to go wherever God led us.

A few weeks after we were married we heard of a church in a little community just two hours from our home. The elderly pastor needed to retire and move because of his wife's increasing health problems. He was concerned about the church. He didn't want to move until another pastor was found. A trip to the community was planned. A visit was scheduled with the dear pastor and his wife. When we arrived in the little town we felt it was a place we could live. A tiny, little place where everyone knew your name and stopped to say hello. Just a small place. A place we knew we would feel at home. Time spent with the pastor and his wife was special. We were invited to stay and share supper with them. Before the evening was over he and his wife were certain that we could love and serve the congregation well. During the next few days the congregation asked us to spend a weekend with them. To get acquainted. To make a decision about the future. Theirs and ours. A week later they would meet again to consider our future with them. I'll never forget the Sunday night the phone call came. The congregation wanted my sweetheart to be their pastor. We were on the move. Following God's plan. 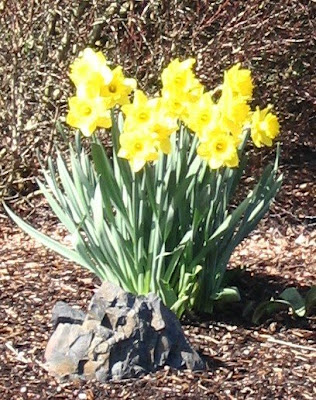 Moving day arrived. My sweetheart drove the truck with most of our belongings. I followed in our car with plants and treasures that needed a more gentle ride. We didn't get as early a start as planned. A short 'break down' with the truck necessitated an unplanned stop. Darkness began to overtake us. As I drove - following the tail lights of the truck ahead - my heart struggled with what was ahead. I dreaded moving into the little, old parsonage. The last pastor's wife was blind and failing in health. Her husband was not strong. The little house next to the church wasn't very clean and the upstairs bedrooms were beyond imagination. A wayward young grandson and his dog had lived upstairs. The condition of those rooms was indescribable. The dear little pastor's wife had told me she wouldn't be able to clean the house when they moved. I told her not to worry about it - I would do it. As I drove my heart was afraid of what I would find. What was I moving into? At night! I wanted to turn around and go back to the home I had left behind. My tears fell as I told God I was willing to go anywhere He wanted us to go. 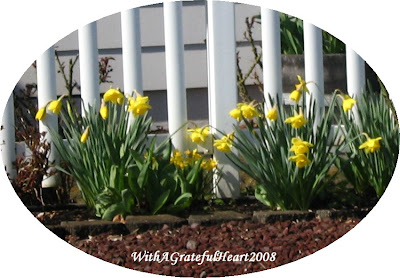 It was late when we arrived at our new home. Turning the key in the lock I felt I would burst into tears. What would the house look like? What would it smell like? We didn't have much furniture and we knew some of the furniture would be left there for us. What would we find? A turn of the key, a click of the light switch, a breath of the air inside - and I could not believe what I found. A spotless house. Fresh. Clean. Some rooms newly painted. And flowers everywhere. In nearly every room. Daffodils. And more daffodils. Downstairs. Upstairs. In the living room. On a cute little table in the kitchen nook. In the bedroom. Everywhere! 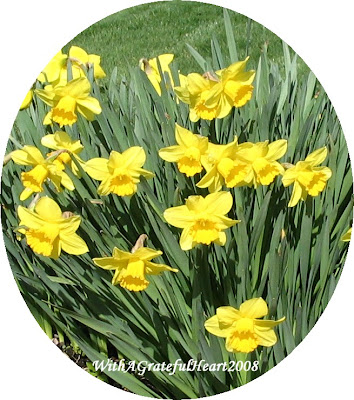 My tears started once again. This time tears of joy. And praise. God had done this for me! To show how much He loved me. And to remind me that following Him was the best choice. Each Spring I am reminded again of how special I am to God. Every daffodil I see brings back that sense of amazement all over again. And I am blessed. Oh, so blessed!
(Most of the congregation spent many hours cleaning and scrubbing and painting to make sure their parsonage was just right for the new pastor and his bride! They had moved the stove and refrigerator out and cleaned under and behind. Every square inch of that little house had been touched by their love and kindness. One of the dear ladies later said, "We couldn't let our pastor and his wife move into the house the way it was!" And they hoped I like daffodils!)
Written by Adrienne at 7:20 AM
Labels: From My Heart