I went back to the store where we stopped first the day before. The day before we three girls browsed and admired but we didn’t buy anything. Near the front window of the store I had spied a set of Christmas dishes – exactly what I have been looking for over the past couple of years. You may remember that I live on Holly Street and we feature holly in our Christmas decorations. My holly decor had spilled over into the kitchen and dining room with nice linens, candleholders and serving dishes. But no holly china! The dishes I found were encircled with holly. Not a garish pattern, just simple and nice. The price was very reasonable but I was very aware of the big sign on the front window that advertised everything half off the following day. Right then and there I knew I had to get up early the next morning, drive to this store and be there when the doors opened – I needed to own these dishes! As we walked out of the store my cousin spotted the cutest little teapot with holly on it. In my mind I added that to my list for the next morning’s excursion.

Saturday seemed to dawn earlier than usual but I was up, dressed and ready to hit the road! My cousin wanted to be my ‘accomplice’ so I picked her up and headed for the freeway. We had such fun plotting and planning and dreaming and thinking of the fun we would have if we were the first ones in the door. Oh, but we weren’t! As I turned the corner into the parking lot it was obvious that half of Portland had the same idea – there was a line waiting at the door. Not to be discouraged, I parked and we joined the line. And, while in the line, we ‘cooked up’ a plan – as soon as we got through the door I would head straight to the corner to get the dishes and, if they were still there, I would stand guard. My cousin would grab a shopping cart if there were any left, she would stop and pick up the darling teapot and come back to the corner where we would carefully place the Christmas china in the cart. It worked! Everything went like clockwork – and it was obvious that we weren’t the only ones who had spied out the territory the day before. People were running toward furniture, grabbing lamps, taking framed pictures off the wall, loading their arms with clothing. It really was amazing! 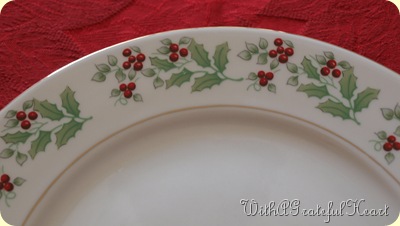 My ‘new’ Christmas dishes will add something special to the holiday season. There are eight dinner plates, eight little plates that can be used as saucers or dessert plates and eight cups. . . 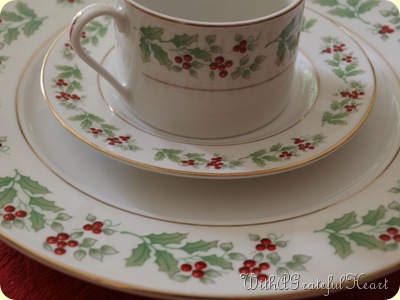 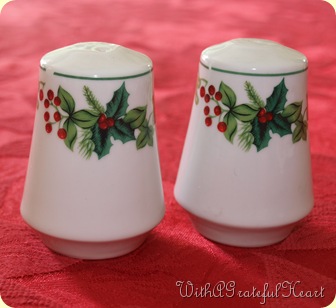 And a spoon rest.

And the little teapot? Don’t you think it’s just the cutest? 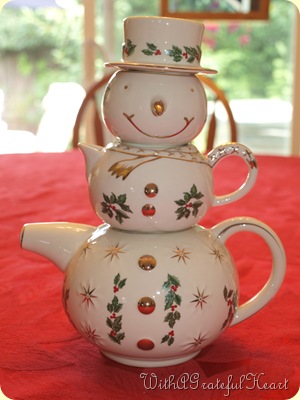 But it’s not just a teapot – it’s a teapot, a creamer and a sugar bowl! 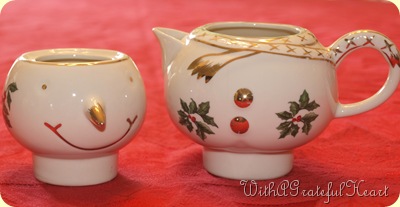 I think I’m beginning to have visions of sugarplums holly dancing in my head! This may be one holiday season that I’ll be ready early – very early. No doubt about that.

(And won’t I have fun snooping around thrift stores and HomeGoods and Marshall's and Target and. . . for more pieces to add to my table?)
Written by Adrienne at 2:26 PM
Labels: Finds and Treasures