I shared about our oldest grandson's football team and about his skills here.  I told you that his team was heading to the State Football Championship game but I never told you the outcome of the game.  We were pretty proud as we parked and walked to the stadium that day over a week ago.  It was a day that promised rain but this grandma's prayers were answered and we had a dry morning and some peeks of the sun here and there. It was exciting to see the big stadium and the sign that announced the event of the day. 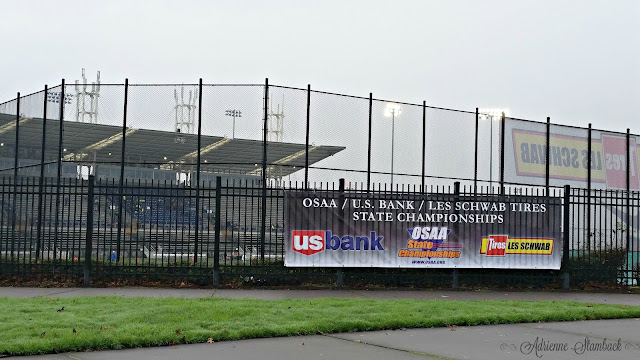 We found our seats next to Rylan's other grandparents and near our son and his family. Excitement filled the air as we watched the team warm up on the field below us. 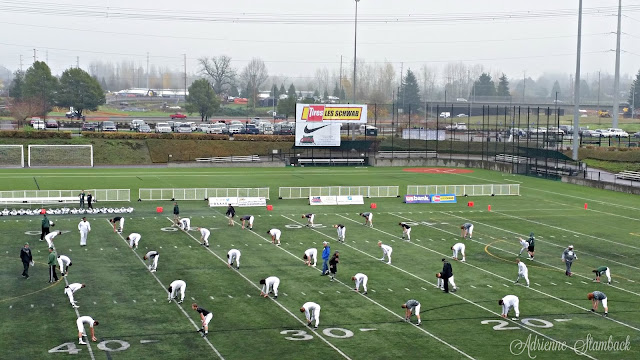 Before each game the captains from each team meet at center field.  I captured this photo of Rylan (#3) and the other three captains after the coin toss by the head referee that determines who would kick the ball off to start the game. 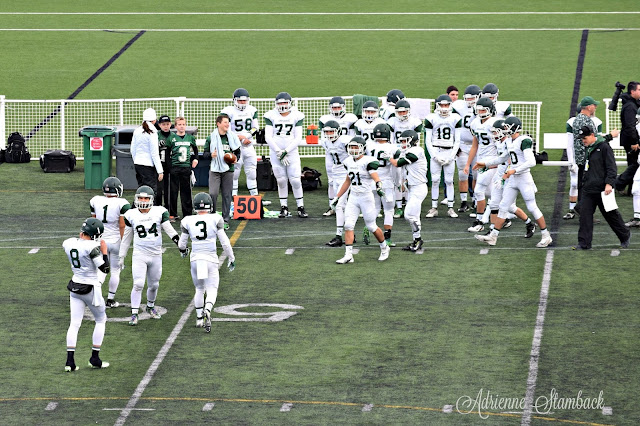 Rylan is a wide receiver. That means he's usually in the backfield ready to catch the ball when it's kicked off to start the game. 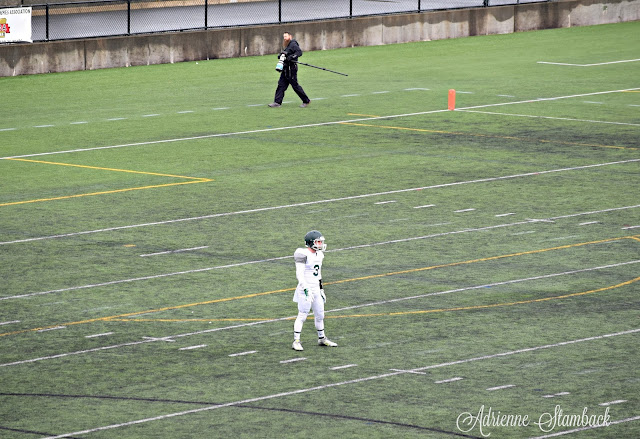 The game began and within a few minutes Rylan caught a pass and made the first touchdown. We were elated!  On our feet, yelling and clapping. Our team took an early lead but by half-time the score was tied. The second half started and the lead changed a few times - back and forth - but when the final buzzer sounded our team lost by one touchdown. 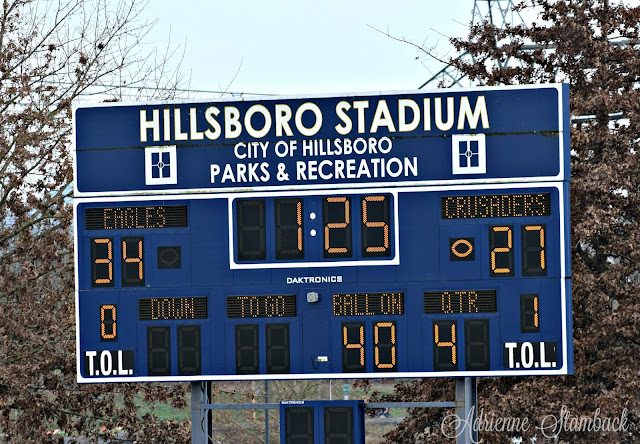 We were disappointed but we were all proud of the way our boys had played. It was an intense game and we could hold our heads high. They had played their hearts out. After the game each of the teams went to different areas on the sidelines to celebrate and greet parents and friends - just time to be together and express our pride and love. Rylan's team always prays together at the end of the post-game time. They gather in a circle, join arms and one of the team members offers a prayer of thanks and gratitude. It was different this time! We were so proud of our boys when they walked past the barricades between our team and the winning team. We all stood behind the barricades and watched as they hugged and congratulated the other team. And then our team asked if the members of the other team would like to join our boys in prayer. It was pretty moving to see and there were many tears on our side of the barricades. 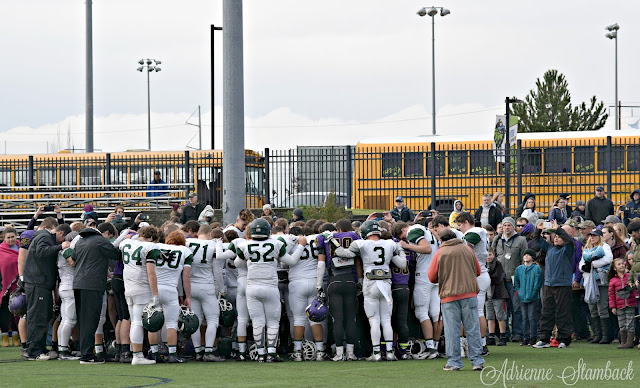 We had a bit of time with Rylan and our son's family. Emotions were tender, hugs abundant, words of pride and encouragement expressed. Time for photos to help keep the memories fresh through years to come. Rylan posed with his mom and dad and one of his two brothers.. . 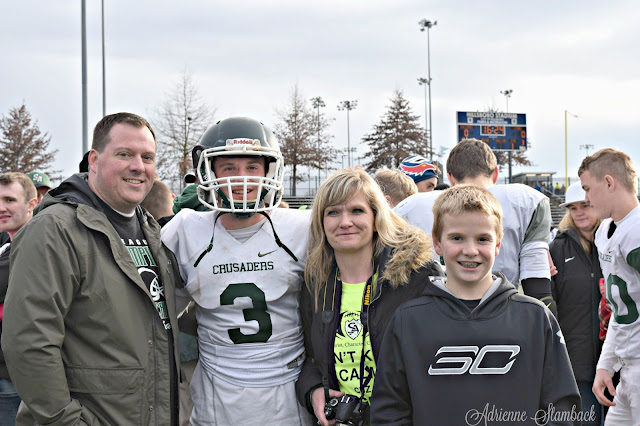 And then with his little sister - our youngest granddaughter. 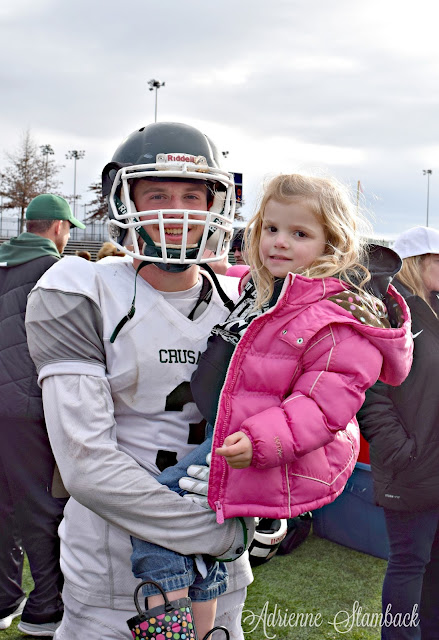 It was soon time to say goodbye and head home. More  hugs and words of love and we turned to go.  It was a hard goodbye - this was the last game Rylan would play with his teammates.  Last high school football game. The end of an era! Time has gone so fast and our hearts couldn't help but wonder how it all happened.  Wasn't it just yesterday we were on the sidelines watching 'little' Rylan playing flag football for the first time?  Soon we will be in the bleachers to watch him in action again. This time it will a basketball in his hands. 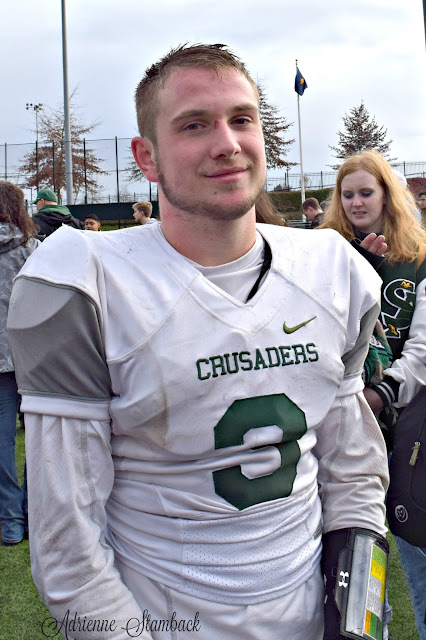 Written by Adrienne at 12:30 AM
Labels: The Grandest Kids